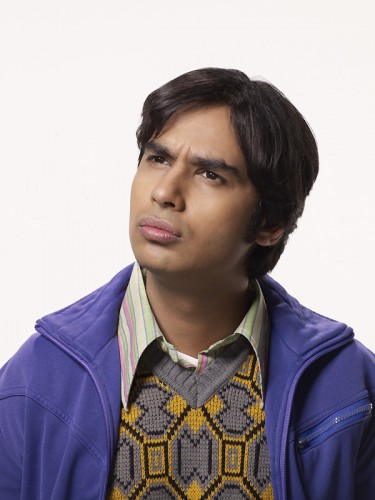 Kunal Nayyar is a British-born, Indian actor best known for his role as Raj Koothrappali on The Big Bang Theory. Born in London, England to a Punjabi family, Kunal Nayyar was raised in New Delhi, India, where his parents still live.

He moved to the U.S. to study business at the University of Portland, Oregon, where he started taking acting classes. He later received a Masters in Fine Arts from Temple University, Philadelphia.

The Big Bang Theory was Kunal Nayyar's first regular television role, following a brief appearance on the CBS crime drama NCIS. His other recent TV credits include guest appearances on Sullivan & Son and The Mindy Project, and as a guest host on The Late Late Show on CBS. Nayyar also starred in the independent film The Scribbler and in the Canadian film Dr. Cabbie.

Since starring in The Big Bang Theory, he has voiced characters in the animated films Ice Age: Continental Drift, Trolls, and 2017's Cars 3. He also voiced Vijal Patel on the Nickelodeon show Sanjay and Craig and the Dr. Pakij character on the Internet animation Fantasy Hospital.

Nayyar's theater credits include Huck and Holden at the Dahlia Theater in Los Angeles and Love's Labour's Lost at the Royal Shakespeare Company in Stratford-upon-Avon, England. In the summer of 2015, Kunal Nayyar performed alongside Jesse Eisenberg in an off-Broadway show, The Spoils, which was written by Eisenberg. The production moved to London's West End during the summer of 2016.

In 2015, Kunal Nayyar published an autobiography, "Yes, My Accent is Real", about growing up in India, moving to America and becoming a star on a hit sitcom.