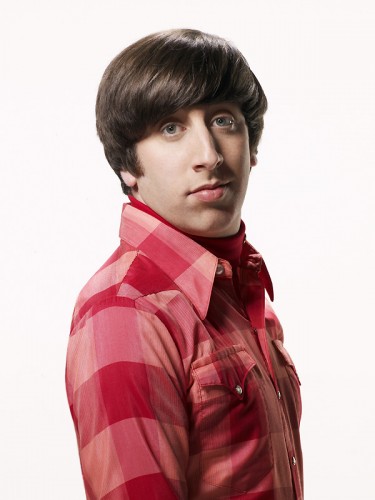 Simon Helberg is an American actor, comedian and musician best known for his role as Howard Wolowitz on The Big Bang Theory. In 2013, Helberg won a Critics' Choice Television Award for his work on the show.

Before The Big Bang Theory, Helberg's TV roles include a recurring part on the NBC series Studio 60 on the Sunset Strip and appearances on the sketch comedy series MADtv. His other credits include a recurring role on the Friends spin-off Joey, and guest appearances on Arrested Development, Reno 911!, Less than Perfect, and Sabrina, the Teenage Witch.

Since starring on The Big Bang Theory, Helberg has lent his voice to TV shows including Kick Buttowski: Suburban Daredevil, Kung Fu Panda, and The Tom and Jerry Show.

His film credits include the 2009 Coen brothers' film A Serious Man, Good Night, and Good Luck, The Selling, and I Am I. With his wife Jocelyn Towne, Simon Helberg directed the 2015 romantic comedy We'll Never Have Paris, which he wrote based on the real-life story of their engagement.

In 2016, Simon Helberg starred alongside Meryl Streep and Hugh Grant in the film Florence Foster Jenkins, adopted from a true-story of a wealthy socialite who became a cult singing sensation despite her lack of musical talent. Helberg stars as the titular character's reluctant pianist, Cosme McMoon. As an accomplished pianist, the film features Helberg's real piano playing. For the role, Helberg was nominated for a Golden Globe Award for Best Supporting Actor in a Motion Picture.

33 weeks ago: RT @JordanUhl: Pelosi just campaigned for an anti-choice candidate, Henry Cuellar, over a pro-choice one, Jessica Cisneros. Cuellar won by?

33 weeks ago: RT @SawyerHackett: Start the clock. 30 days from today it will be a first degree felony?punishable by life in prison?for a Texas doctor to?

33 weeks ago: RT @dereckapurnell: If this was about babies, there would be universal healthcare. Free education. Free daycare. Southern states would be d?

33 weeks ago: RT @RobCGalbraith: Senate Dems are going to explore this grim reality just as soon as they get back from their vacations https://t.co/x6guf?