Barry Kripke is a scientist at Caltech whose research has covered plasma physics and string theory.

Barry’s work at the university has brought him into frequent contact with Sheldon, Leonard, Howard and Raj. Despite Sheldon’s one time attempt to befriend Barry, it’s not clear that any of the group really like Barry.

Barry has a case of rhotacism which means he pronounces “r” and “l” as “w”. When Barry bought a new iPhone featuring Siri, the voice recognition technology was unable to understanding his verbal commands.

Barry has been shown to be creepy towards women, including Penny and Amy, and with an offensive sense of humor. Barry has often made Sheldon the butt of his jokes and pranks.

In Barry’s first appearance in “The Killer Robot Instability”, he challenged the guys to a killer robot challenge ahead of a local tournament. After an upset Howard left his team without its engineer, Kripke’s robot, the Kripke Krippler, destroyed the guys’ robot, M.O.N.T.E.

When Sheldon learned that Barry controlled the university’s open science grid computer and favored his friends in “The Friendship Algorithm”, Sheldon tried to befriend Kripke. After devising a friendship algorithm, Sheldon spent time with Barry doing a recreational activity he enjoys rock climbing, and then invited him back to the apartment for dinner. Despite his friends’ displeasure at Barry hanging around with them, Sheldon persevered with Barry until he revealed that the grid computer works on an official schedule that he has no control over. Sheldon’s nascent friendship with Barry came to a sudden end. 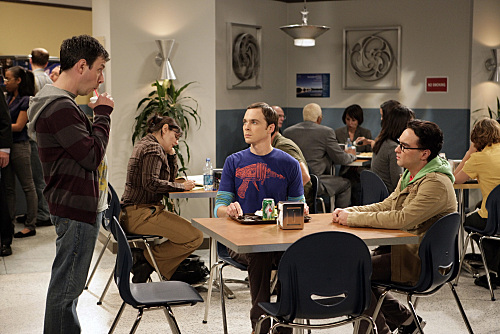 After Sheldon was forced to make an embarrassing retraction in “The Electric Can Opener Fluctuation”, Barry publicly humiliated Sheldon in the university cafeteria, after which an upset Sheldon fled back to Texas.

When Sheldon was set to be a guest on public radio in “The Vengeance Formulation”, Barry deprived Sheldon of the opportunity to be the one to share the news with his friends. On the day of the interview, Barry piped helium into Sheldon’s office during his radio broadcast. As Sheldon’s voice became ever higher, Sheldon found the nozzle and instantly knew Kripke was behind the prank. 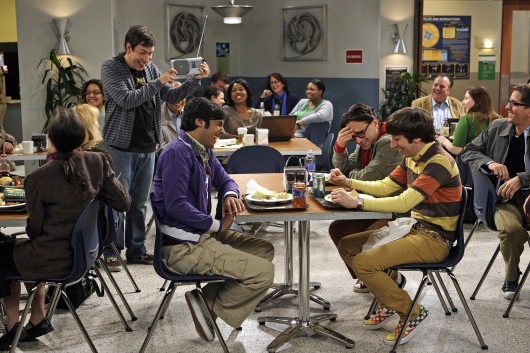 After Leonard and Raj tried to cheer Sheldon up after his national humiliation, Sheldon vowed to exact vengeance on Kripke. After Leonard and Raj tried to guide Sheldon towards a reprisal that was appropriate, Sheldon rigged up a load of chemicals in the ceiling above Kripke’s plasma lab to be triggered by motion sensors to produce a foam that would drop down on him and his lab. As Sheldon, Leonard and Raj watched the prank unfold, they were surprised when Kripke was joined by university dignitaries. Sheldon neglected to include an abort switch, so the prank went off on Kripke and his unsuspecting guests. As Kripke and his colleagues wondered what had hit them, a pre-recorded message from Sheldon took credit for the prank, thanking Leonard and Raj for their contribution. 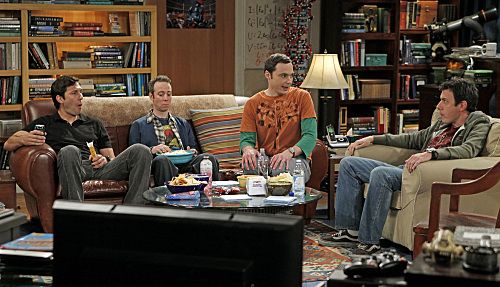 When Sheldon was upset that his friends were spending so much time in Raj and Priya’s apartment in “The Toast Derivation”, he formed his own social group with Penny’s ex-boyfriend Zack, Stuart, and Barry Kripke. As Barry spent the night at Sheldon’s apartment, it was clear he was mainly interested in the promised raffle. When Barry, Stuart and Zack decided to sing karaoke and drink beer rather than follow Sheldon’s plans for the evening, Sheldon got fed up with his new friends and left.

After Barry noticed that Raj had bought a new iPhone with Siri in “The Beta Test Initiation”, Kripke mentioned how he had the same phone and found the voice recognition on it to be “tewible”. As he demonstrated, Siri could not understand “Bawwy’s” command to “wecommend a westauwant”. Still, Barry did find a use for the phone in taking “high-wes” pictures of his junk for “Cwaigswist”. 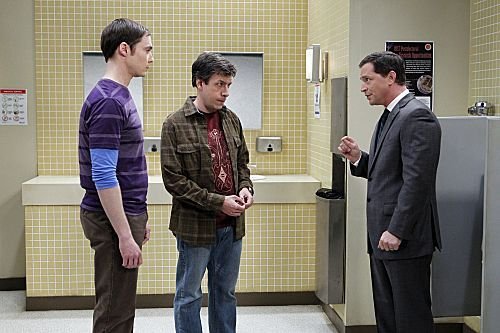 When Barry and Sheldon went head-to-head for a newly vacated office at the university in “The Rothman Disintegration”, they could not agree on a challenge that was fair to both of them, something they were both equally good at, so they settled on something they were equally bad at: sport. During a torturous evening for Leonard, Howard and Raj, who were there to watch the showdown, Sheldon and Barry tried to settle things on the basketball court - but it was hard to see a winner. Hours later, Leonard suggested they simply see who could bounce a ball the highest. Sheldon won Professor Rothman’s office, though it didn’t turn out to be the prize he imagined.

Barry attended Howard’s bachelor party in “The Stag Convergence”, but he was disappointed to find out there weren’t going to be any strippers, particularly since he had withdrawn a hundred dollars in singles for the occasion.

When Barry and Sheldon were forced to work together on a grant proposal in “The Cooper/Kripke Inversion”, Sheldon was distraught to find out that Kripke’s research was far ahead of his. After Barry assumed that the reason for Sheldon’s disappointing work was his active sex life with Amy, Kripke delighted in encouraging Sheldon to talk intimately about his relationship.

After a tenured position opened up at the university in “The Tenure Turbulence”, Kripke decided to suck up to the tenure committee to try get the job. Sheldon, Leonard and Raj also decided to put their names in the hat, but their competition soon threatened to drive them apart. The trio decided to back off for the sake of their friendships, but they then thought better of leaving the race to Kripke. 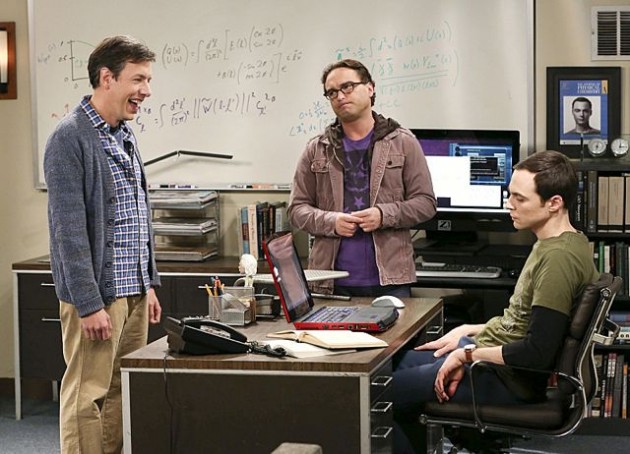 When Sheldon’s breakthrough was disproved by Leonard in “The Discovery Dissipation”, Kripke rubbed it in Sheldon’s face, terming him “The Wetwactor” and suggesting Sheldon should work in retail so he could take things back for a living. Sheldon fought back by needling Barry about his speech impediment, but when Barry feigned upset over this Sheldon quickly took it back. 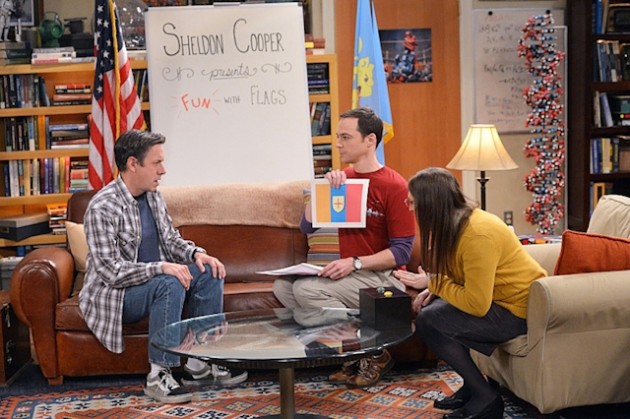 Barry joined Sheldon and Amy in what was to be the final episode of Fun with Flags in “The Champagne Reflection” to play a game of “Flag or Not A Flag”.

After Amy helped Barry out with his research paper, Kripke gave her a thank you gift in “The Comic Book Store Regeneration”. Sheldon was upset that Amy helped his professional rival out. 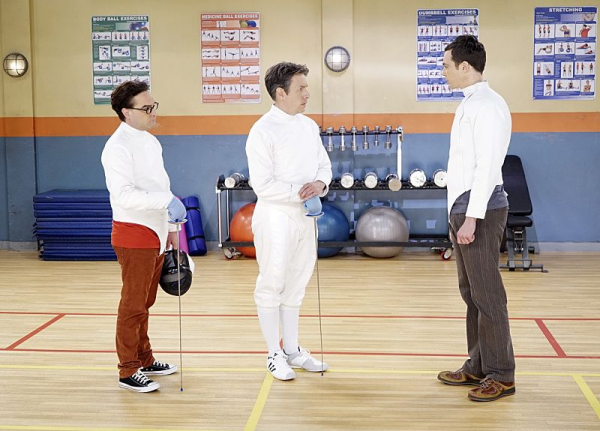 When Sheldon, Leonard, Howard and Raj joined a fencing class being taught by Barry in “The Perspiration Inspiration”, Kripke was surprised to learn that Sheldon was no longer in a relationship with Amy. After Kripke sent Amy a text message asking her out, she was unsure what to do, and somewhat disturbed that Barry had included a lewd picture in the message. Amy eventually decided to turn Barry down.

During a nationwide helium shortage, Sheldon and Leonard turned to Barry in “The Helium Insufficiency” for help with their experiment. Although Barry had helium to spare, he would only share it with the guys if they agreed to list his name on their paper. As a result, Sheldon and Leonard turned to the black market to source the precious commodity.

During a live Valentine’s Day broadcast of Fun with Flags in “The Valentino Submergence”, Barry phoned in to the show to talk about his love life and try attract a mate, much to Sheldon and Amy’s displeasure.

When Barry attended Sheldon’s birthday party in “The Celebration Experimentation”, he took the opportunity to try hit on Leonard’s mother, Beverly, whom he dubbed a cougar, making Leonard extremely uncomfortable.

After Howard’s friends insisted his remote-controlled Stephen Hawking toy was offensive in “The Geology Elevation”, Howard and Raj took the toy to Barry to get his opinion. When Barry called the device hilarious and asked for the remote so he could drive it into the girls’ locker room, Howard finally realised it was offensive.

Amy: Hi. You're on Fun with Flags.
Barry Kripke: Hello. I want to talk about how lonely I am, too.
Raj: Kripke? Is that you?
Barry Kripke: Yeah, I'm just sitting here all by myself wondering if I'll ever find someone to share my life with. Preferably Asian, 18-24, no fatties.

Barry Kripke: We're all pathetic and creepy, and can't get girls. That's why we fight robots.

Sheldon: No, that's okay. I can fight my own battles. Isn't that right, Bawwy?
Barry Kripke: Is that a reference to my speech impediment? That's pretty hurtful. I can't control it.
Sheldon: You're right. That was uncalled for. I take it back.
Barry Kripke: Of course you do, because you're The Retractor!

Barry Kripke: Hey, Cooper. I hear you're going to be on the radio with Ira Flatow from Science Friday next week.
Sheldon: Thank you, Kripke, for depriving me of the opportunity to share my news with my friends.
Barry Kripke: My pleasure.
Sheldon: My thanks were not sincere.
Barry Kripke: Ah, but my pleasure is.