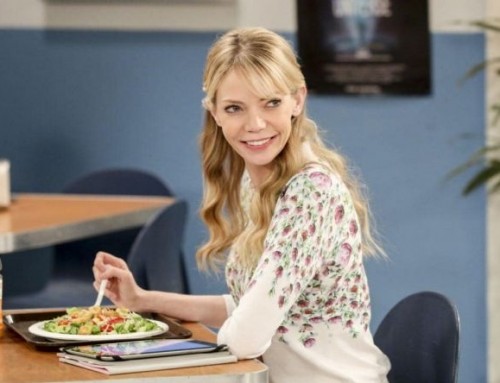 Ramona Nowitzki is a post-doctoral candidate and former graduate at Caltech who has long harbored a deep appreciation, bordering on obsession, for Sheldon and his work.

When Sheldon grudgingly gave a talk about theoretical physics to an audience of grad students in "The Cooper-Nowitzki Theorem", Ramona was perhaps the only student who came away with an appreciation for Sheldon. The next day, Ramona approached Sheldon in the university cafeteria, confessing she had read everything he’d ever published. Sheldon, more interested in the free food, agreed to let Ramona buy him dinner that night.

Ramona quickly became a part of Sheldon’s life as he worked towards a breakthrough on how neutrinos emerge from a string-net condensate. Although Sheldon was initially happy to have somebody help him focus on his work, he got fed up when Ramona insisted he could not waste time with things he enjoyed like comic books, watching TV or going paintballing.

Sheldon struggled to find a way to get Ramona off his back, even seeking out Penny’s help to try drive Ramona away. Eventually, Ramona’s assistance helped Sheldon to reconcile the black hole information paradox with his theory of string-network condensates. After Sheldon asked Ramona how he could repay her, he was appalled at her suggestion that they share credit on the paper. Sheldon finally found his voice and told Ramona to get out.

Years later in "The Long Distance Dissonance", Ramona returned to Caltech for a post-doctoral degree after working at CERN in Geneva, Switzerland. Ramona’s reappearance came just after Amy left for a summer research fellowship at Princeton. Sheldon started to spend a lot of time with Ramona, much to the concern of his friends and Amy.

As the gang struggled to keep Ramona from damaging Amy and Sheldon’s relationship, he was blind to Ramona’s intentions. When Sheldon finally asked her if she was interested in she were seeking a romantic relationship with him, Ramona suggested she might be.

As a result, Sheldon immediately backed away from Ramona, left his office to go to the airport, where he boarded a flight to New Jersey. Across the country, Sheldon went to Amy’s apartment and knocked on her door. When Amy answered, Sheldon was down on one knee and asked her to marry him.

In "The Proposal Proposal", Ramona heard the news that Sheldon and Amy were now engaged. When Amy returned to Caltech after a summer at Princeton, she ran into Ramona leading the guys to expect a confrontation because Ramona had kissed Sheldon. Instead, much to Ramona's surprise, Amy thanked Ramona.