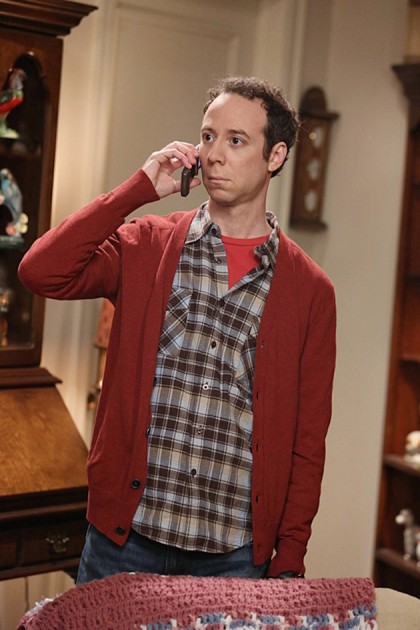 Stuart Bloom is the owner of The Comic Center of Pasadena, the comic book store the guys frequent. Stuart is a talented artist and graduate of the Rhode Island School of Design.

In Stuart's first appearance on the show, he asked Penny out on a date. Before his second date with Penny, Stuart asked for Leonard's advice on dating her. Leonard, feeling threatened by Stuart, gave Stuart bad advice. Although Stuart and Penny's second date went fine, when they were getting romantic Penny mistakenly called him "Leonard", putting an end to their relationship.

Stuart has also shown a romantic interest in Amy. When Amy visited the comic book store, Stuart inquired about her relationship status and they later agreed to go out on a date. A jealous Sheldon interrupted their date at the cinema to ask Amy to be his girlfriend, although Stuart still finished the date and walked Amy home.

Although the guys appreciate Stuart's personal touch when buying their comics, it doesn't seem Stuart is well rewarded for his job. Stuart has made frequent mentions of the fact the store is struggling and that he now has to live there. Stuart has revealed he works 70 hours and clears an average of $1.65 per hour. When Penny asked for advice on comic books, Stuart told her not to own a store that sells them. Stuart has felt threatened by a competing comic book store, Capital Comics, whose rude boss is a jerk to him.

When Howard was in Space, Stuart become close friends with Raj and began hanging out with the gang. Before accepting Stuart as a member of the gang, Sheldon quizzed him on his education and only allowed him to be in the group as "fake Wolowitz". When Howard returned from space, Sheldon initially wanted to dismiss Stuart from their group. Sheldon relented when Stuart offered him a 30% discount at the Comic Center.

When Stuart's comic book store burnt to the ground in an accidental fire that was definitely not started for the insurance money, Howard offered Stuart a live-in role caring for his recently injured mother. Despite the job involving humiliation, degradation and verbal abuse, Stuart enjoyed taking care of Mrs. Wolowitz and developed a close bond with her. Stuart's friendship with Howard suffered as he lived with Mrs. Wolowitz, with Howard thinking Stuart was mooching off his other.

After Stuart and Raj were caught using Howard and Bernadette's hot tub when they were supposed to be away, Stuart admitted that he never returned his key. When Bernadette was pregnant, Stuart revealed that he had been evicted from his apartment. Howard told Bernadette he thought having Stuart stay with them would be a good idea given they'll need all the help they can get when their child is born. Stuart moved back into Howard and Bernadette's house, helping them with chores and taking care of Halley.

When Bernadette invited her new co-worker, Ruchi, to go out for drinks, Howard sensed an opportunity to try fix up his single friends - Raj and Stuart - by sending them along to the bar without asking Bernadette. After Stuart and Raj showed up at the bar, they both flirted with Ruchi and tried to impress her. Later, Stuart and Raj argued over who should drop out of the "race" to court Ruchi, with neither wanting to be the one to walk away.

After Raj went to a bar to meet Ruchi, Stuart arrived late, upset that Raj deliberately did not invite him. When Ruchi realized the guys were interested in more than friendship, she told them she wasn't looking for a long-term relationship but would be happy to hang out with them as pals. Stuart said he would like to spend time with her as a friend if she was open to that.

When Raj started a casual relationship with Ruchi after bumping into her one night and hitting it off, Stuart said Raj was his friend and he was happy for him. Also, although he didn't know how Raj would screw it up, he knew he would.

During Bernadette's second pregnancy, Howard decided he and Stuart should "divide and conquer" when it came to their responsibilities to care for Bernadette and Halley. Stuart chose to focus on taking care of the baby as it was less emasculating than looking after Bernadette.

When Howard was tasked with organizing Halley's first birthday party, he invited Stuart and asked him to bring a few things, like "balloons, streamers, ice, snacks, a bounce house, face painter, and a couple kids whose parents are willing to lie and say they know me from the Daddy and Me class I've never been to." Stuart agreed to help Howard out, but when a spot opened up at the free clinic for a colonoscopy, Stuart had to back out.

When Bernadette went out for drinks with her new co-worker, Ruchi, Howard decided to send his two single friends, Raj and Stuart, to meet her. Raj and Stuart competed to win Ruchi’s affections, but she made it clear she was only looking for friendship. Later, when Ruchi started dating Raj, Stuart insisted he was fine with as he was sure Raj would somehow screw it up.

After author Neil Gaiman visited Stuart’s store and tweeted about it, the Comic Center attracted a surge of new customers. Stuart took on a new employee, Denise, to help deal with the demand.

When Stuart asked his new employee, Denise, whether she would like to attend Sheldon and Amy’s wedding with him, she was initially reluctant to fraternize with her boss. Denise had a change of heart when she learned that Mark Hamill would be officiating the wedding. While the ceremony was delayed as Sheldon and Amy worked out a new scientific theory together, Stuart impressed Denise with his Star Wars knowledge during an impromptu Q&A session with Mark Hamill.

Stuart: Oh, Sheldon, I'm afraid you couldn't be more wrong.
Sheldon: More wrong? Wrong is an absolute state and not subject to gradation.
Stuart: Of course it is. It's a little wrong to say a tomato is a vegetable, it's very wrong to say it's a suspension bridge.

Howard: Hang on, I know a place where you could you stay and earn some money at the same time.
Stuart: Great!
Howard: I just have to warn you: it will involve humiliation, degradation and verbal abuse.
Stuart: So, what's the catch?

Bernadette: Why are they staring?
Amy: Who cares? Just soak it in. Hello, boys.
Stuart: Oh, hey. (To the other customers) Could you please stop staring? They're just girls. It's nothing you haven't seen in movies or in drawings.
Penny: Hey, Stuart.
Stuart: What brings you guys here?
Bernadette: We were looking for a recommendation about comic books.
Stuart: Oh, well, I recommend you don't open a store and sell them.
Penny: No, we were just wondering why the guys like this stuff so much, so we thought wed give it a try.
Stuart: Oh, okay. What do you think you might be into? Superhero, fantasy, graphic novels, manga? (To the customers) I swear I will turn a hose on you.

Bernadette: Hey, Stuart.
Stuart: *startled* Hey.
Bernadette: Sorry, did I startle you?
Stuart: Yes, but at this point pretty much any customer does.

Stuart: Okay, I'll go. Howard, when I think about you and Bernadette starting this wonderful life together, I can't help but get a little choked up. I mean, look at you. You have everything. Look at me. I'm 37. I sleep in the back of a comic book store, and I have the bone density of an 80-year-old man. To Howard.