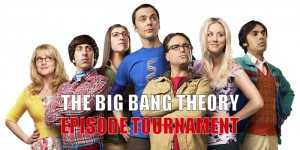 We are running an episode tournament to find the fans' favorite episodes from the entire twelve-season run of The Big Bang Theory.

The nominations round is open now. You can vote for up to sixteen of your favorite episodes of the show to go through to the knock-out rounds.

The nominations round will close Monday, August 5, when the sixteen most popular episodes will advance to the knock-outs.