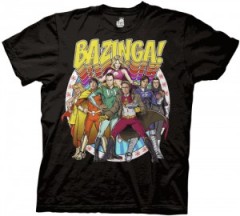 This black t-shirt features the entire Big Bang Theory gang dressed as superheroes. The t-shirt features a shield design and Sheldon's catchphrase, "Bazinga!", printed above. If you look closely, Howard is even wearing one of his customary belt buckles on his superhero outfit. Available from TVStoreOnline.com. 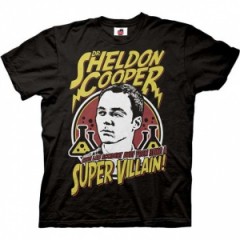 One of the earlier t-shirts, this black tee features Sheldon and the yellow text "Dr Sheldon Cooper. One lab accident away from being a Super Villain". Sheldon is inside a circle with lab beakers bubbling either side of him. Leonard memorably said these words to Penny when she and Sheldon were feuding in the second-season episode "The Panty Pinata Polarization". As Sheldon has pointed out, many super villains have advanced degrees so he wouldn't be out of place. Available from StylinOnline.com. 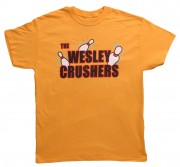 "Hey look, they named their team after me!"  This t-shirt has the distinction of not only being an officially licensed Big Bang Theory t-shirt, but also a Sheldon shirt since Sheldon had this t-shirt designed and wore it on the show. Sheldon had this t-shirt made for a bowling rematch against his then mortal enemy Wil Wheaton. Wheaton of course played Wesley Crusher on Star Trek: The Next Generation. Sheldon named the team the Wesley CRUSHERS to imply they would be the crushers of Wesley, though his team-mates thought the name suggested they were fans of Wesley Crusher. Available from T-Shirts.com. 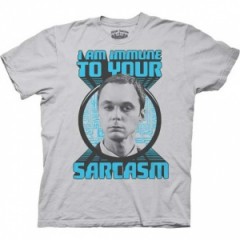 This silver t-shirt features a picture of Sheldon and the quote "I Am Immune To Your Sarcasm" in blue lettering. Sheldon said this to another one of his mortal enemies, Leslie Winkle. Leslie Winkle was not a big fan of Sheldon either; referring to him as a "Passive-Aggressive East Texas Blowhole". Available from StylinOnline.com.

This silver t-shirt features an illustration of the five main characters' unique clothing styles. Howard is represented by his striped purple turtle neck, alien belt buckle, tight purple pants and Vans. Sheldon is shown with his Flash t-shirt and checkered pants. Leonard's profile includes his glasses, his Green recycle t-shirt and olive-green hoodie, mustard-colored pants and his Converse sneakers. Raj's layered look includes a white shirt, a yellow patterned jumper and his brown coat, along with grey pants and Vans. Penny is shown in a flowery dress and heels. Available from TVStoreOnline.com.

This black t-shirt features the white text "Knock Knock Knock, Penny!" three times, to match Sheldon's idiosyncratic knock most commonly used on Penny's door. Sheldon's unique knock wasn't actually settled on until the second-season episode "The Euclid Alternative", though Sheldon had different unusual knocks through the latter half of the show's first season. Available from TVStoreOnline.com and 8Ball.co.uk. 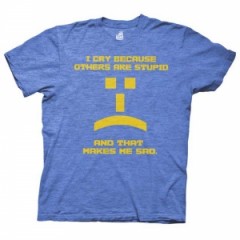 4  Others Are Stupid T-Shirt

This blue t-shirt features Sheldon's quote "I cry because others are stupid and that makes me sad" with a sad emoticon. This phrase was Sheldon's attempt to comfort a crying Penny. Penny had requested Sheldon teach her "a little" physics. Since physics "encompasses the entire universe, from quantum particles to supernovas, from spinning electrons to spinning galaxies", there is of course no such thing as a "little physics". Available from 80sTees.com.

In third place, this white t-shirt features The Friendship Algorithm by Dr. Sheldon Cooper, Ph. D. Sheldon thought up this algorithm to try befriend Barry Kripke, whom Sheldon had heard was in control of the university's open science grid computer that he needed. With some help from the book "Stu the Cockatoo is New at the Zoo" and Howard's addition of a loop counter, Sheldon devised this algorithm and successfully, albeit temporarily, befriended Kripke. Available from TVStoreOnline.com and 8Ball.co.uk.

In second place, this grey t-shirt features a cute drawing of a kitty with the Soft Kitty lyrics. Sheldon's mother used to sing the song to him when he was ill as a child. The song was first mentioned in the first-season episode "The Pancake Batter Anomaly", when a sick Sheldon requested Penny sing the song to him. The lyrics are "Soft kitty, Warm kitty, Little ball of fur. Happy kitty, Sleepy kitty, Purr, purr, purr". Available from TVStoreOnline.com.

In first place, this red t-shirt features the "Bazinga!" logo. "Bazinga!" is printed in yellow lettering on a white circle with a black lightning bolt below. By far the most iconic of the show's t-shirts, this design has been printed in multiple colors and with alternate designs, but we think the original red design is the best. "Bazinga!" is a word used to Sheldon after jokes and his "classic pranks", and was first used in the second-season finale "The Monopolar Expedition". Available from TVStoreOnline.com and 8Ball.co.uk.