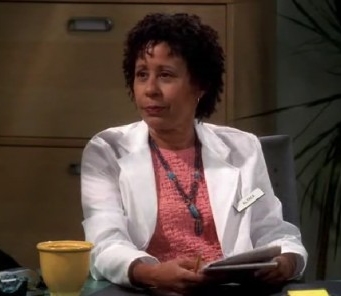 Althea Davis is a nurse who has worked a number of medical jobs which have brought her into contact with Sheldon, Leonard, Howard and Bernadette.

In the Pilot episode, Althea was a receptionist at the High IQ Sperm Bank which Sheldon and Leonard attended in order to raise some money for fractional T1 bandwidth. Althea was trying to do a crossword at her desk, but Leonard jumped in and solved the puzzle for her.

Althea was a nurse in a hospital emergency room in "The Peanut Reaction" when Howard initially faked an allergic reaction to keep Leonard out of the apartment for a few hours. When Althea wouldn't play along with his plan, Howard ate a peanut granola bar and suffered an anaphylactic shock.

Althea was also in the emergency room when Howard arrived with a robot hand stuck on an intimate part of his anatomy in "The Robotic Manipulation". Despite Howard's concern, Althea solved his problem by turning the computer off and on again.

When Sheldon tried to visit his barber in hospital for a haircut in "The Werewolf Transformation", Althea caught him and thought he was a patient who had escaped from the psych ward.