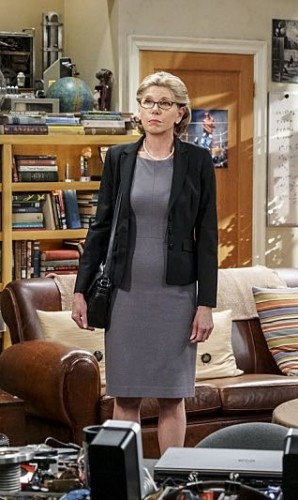 Dr. Beverly Hofstadter is a neuroscientist, psychiatrist and author who was written a number of books on parenting. Beverly is the mother of Leonard Hofstadter, who has a difficult relationship with his mother because of her distant parenting style.

Beverly has a cold, analytical personality and is uncomfortable with many forms of social interaction. Her views on child-rearing, on which she has written a number of books, support a reward-based environment rather than unconditional love.

Beverly was married to Alfred Hofstadter, an anthropologist, with whom she had three children: Leonard, his younger brother Michael, and an older sister.

Beverly’s marriage to Alfred was distant with the couple only having intercourse as a pro forma consummation of their marriage and for the purposes of reproduction. As a result, Beverly says she has been responsible for her own orgasms since 1982. Perhaps to gain the intimacy he did not receive from his wife, Alfred used to borrow Leonard’s hugging machine. After Alfred cheated on Beverly with a waitress at the university cafeteria, she divorced him.

Beverly has published at least two books on the subject of parenting: “Needy Baby, Greedy Baby” and “The Disappointing Child”. In “The Line Substitution Solution”, Beverly said she is writing a book on high achieving couples. Leonard mentioned in “The Explosion Implosion” that Beverly featured him in her book “He's Doing It On Purpose: Raising a Teenage Bed-Wetter”.

Beverly has also published a number of research papers:

When Beverly decided to visit Pasadena in “The Maternal Capacitance”, Leonard was not looking forward to his mother’s visit. While Beverly managed to make Leonard, Penny, Howard and Raj uncomfortable with her cold, analytical style, she found she had a lot in common with Sheldon.

Beverly’s visit drove Leonard and Penny to drown their sorrows and almost get together, though Leonard managed to inadvertently talk Penny out of it. Beverly and Sheldon spent a lot of time together - viewing scans of his brain, discussing Beverly’s papers, and singing together on RockBand.

When Beverly visited Pasadena over Christmas in “The Maternal Congruence”, Leonard was upset to find out that Sheldon and Beverly are in closer contact than he is with his mother. Still, Leonard was uneasy about opening up to his mother about his relationship with Penny, especially after Beverly revealed that she was divorcing Leonard’s father for cheating on her with a waitress in the university cafeteria. Beverly also broke the news that Leonard’s dog had died and Sheldon had been consulted on putting the dog down.

Fed up with his mother’s lack of compassion for him, Leonard left Beverly with Penny. After Penny took Beverly out for a drink, Penny revealed that she and Leonard were in a relationship. Beverly did not understand why Leonard had kept it a secret when Penny is a “lovely, charming young woman”. Heavily inebriated, Beverly kissed a confused Sheldon on the lips, declaring she’d rather have the busboy at the Cheesecake Factory. As she was driven back to the airport, Beverly apologized to Sheldon for her inappropriate behavior and told Leonard to take good care of Penny.

“The Skank Reflex Analysis”: When Leonard was down in the dumps over his failing relationship with Priya and the revelation that Penny spent the night with Raj, Sheldon contacted Beverly to give her son advice. Beverly’s advice amounted to “Buck up, sissy pants”, which did not cheer Leonard up, and that her books are available on Amazon.

“The Raiders Minimisation”: When Penny’s psychology class at the community college included Beverly’s book “The Disappointing Child” on its recommended reading list, Leonard used the book’s public airing of Leonard’s embarrassing childhood to gain sympathy from Penny. After Penny was told about Leonard’s scheme, she contacted Beverly who confronted Leonard by video chat to ask why he keeps including her in his sex life.

When Leonard contacted Beverly to tell his mother he was now engaged to Penny in “The Status Quo Combustion”, she revealed that Sheldon had already told her. Although Leonard said he hates how Beverly talks to Sheldon more than she talks to him, he wasn’t keen on speaking to his mother more often. Beverly went on to say that although she’d had her misgivings about Penny, Sheldon spoke very fondly of her so if she was good enough for him, she’s good enough for her. When Leonard was annoyed that Beverly didn’t seem to care whether Penny was good enough for him, she told him that he should work on his need for maternal approval of his life choices.

“The Maternal Combustion”: When Sheldon’s mother, Mary, and Beverly visited Pasadena to see Sheldon and Leonard receive an award, their contrasting personalities led to conflict as they argued about religion and science. With Mary and Beverly’s contrasting parenting styles on display, Leonard and Sheldon both saw the mother they might have preferred growing up.  As Leonard and Penny stayed with Mary in the apartment, Sheldon went for a drink with Beverly to get her away from the apartment.

After Beverly commented how her parenting style is diametrically opposed to Mary’s and wondered whether Sheldon might have flourished more in a reward-based environment, Sheldon accepted that was a possibility but insisted he was happy enough that his mother made him spaghetti with little hot dogs cut up in them whenever he wanted them. Having seen there was more than one way to raise a child, Beverly returned to the apartment and told Leonard she wanted to initiate a new protocol where she showers him with unconditional love.

“The Celebration Experimentation”: When Beverly visited Pasadena for Sheldon’s birthday party in “The Celebration Experimentation”, Leonard was surprised that she came all the way for Sheldon’s birthday. Beverly said she was happy to travel since Sheldon visited her for her 60th birthday - a party that Leonard didn’t even know about. Barry Kripke spent the evening trying to hit on Beverly, much to Leonard’s discomfort.

When Penny spent the day with Beverly in “The Line Substitution Solution”, Beverly made a number of digs at Penny despite her attempts to try connect with her mother-in-law. Beverly eventually admitted that she was hurt by Leonard and Penny getting married without inviting her or even telling her about the ceremony. To make things up to Beverly, Penny offers to have a second wedding ceremony while she’s in town.

“The Convergence Convergence”: After announcing they will have a second wedding ceremony for their family and friends, Leonard and Penny’s families came to Pasadena. Beverly was unhappy that Leonard invited his father, Alfred, even after he cheated on her. Things were still frosty between Beverly and Sheldon’s mother, Mary, after their previous encounter and things didn’t improve when Leonard’s parents and Sheldon’s mother joined the gang for dinner the night before the ceremony.

On the day of Leonard and Penny’s second wedding ceremony in “The Conjugal Conjecture”, Beverly did not want to attend after she found out that Alfred and Mary might have spent the night together. Penny pointed out that Beverly not attending would let Alfred know he’d got under her skin, so Beverly agreed to go. Despite the tension between them, Beverly and Alfred agreed that although they did not bring out the best in each other, something wonderful did come from their relationship: Leonard. The next day, as Leonard drove them home, Beverly and Alfred were civil for about a minute before they started bickering again.

When Sheldon had trouble with the idea of Raj moving into his old room in “The Escape Hatch Identification”, Beverly told Sheldon that his old room represented an escape hatch from his current living situation and he was worried that without it he might be trapped in a relationship with Amy forever. When Beverly found out that Leonard and Penny had taken Raj in, she suggested they are avoiding some harsh realities in their relationship. Leonard later called Beverly to dispute her hypothesis and insist that he and Penny don’t have problems with their marriage.

After Penny answered a phone call from Beverly for Leonard in “The Explosion Implosion”, the pair developed a close bond with Beverly dishing on her recent amorous activities. Amy was jealous of Penny's close relationship with Leonard's mother, while Leonard was more annoyed that his mother told Penny she was proud of her - something Beverly has never said about him. When Leonard confronted his mother, Beverly told him how great Penny was and admitted she was proud of Leonard - if only for marrying well.