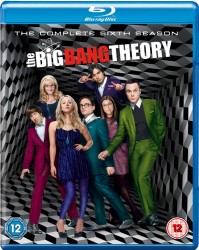 Includes the sixth season on Blu-ray and UltraViolet so you can enjoy the film on many different compatible devices.