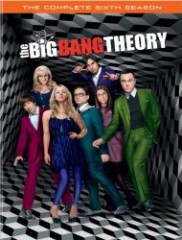 Enjoy the complete sixth season of The Big Bang Theory again on DVD and Blu-ray this September. Features all twenty-four episodes of the 2012/13 season along with new bonus features, including a gag reel and deleted scenes.

The Big Bang Theory's sixth season sees Howard return from space and adjust to normal, married life on earth. Sheldon and Amy's unique relationship continues to progress, though at a slower pace than Amy wants. Leonard and Penny's relationship is business as usual, with Leonard once again proposing to Penny. Meanwhile, Raj finally meets a girl and enters a (somewhat) stable relationship, the demise of which leads to unexpected progress for Raj.

The season starts with Howard still in space, where he must figure out how to break the news to his mother that he'll be moving in with Bernadette. When Howard returns from space, he must adjust not only to married life but life back as a civilian. Initially, he struggles to move on from his space mission, bringing it up at every opportunity, as he fears it's the last great thing he will ever do.

Penny is unsure of her feelings for Leonard and briefly considers breaking up with him, though his sad puppy dogs and the intervention of a concerned Sheldon keep her in the relationship for now. As the season progresses, Leonard once again proposes and forces Penny to confront her commitment issues. Penny admits she's happy in the relationship and it's the inevitability of them getting married that scares her. Leonard tells Penny that he won't propose again and puts the ball in her court. At the end of the season, Leonard is offered the chance to go on a four month expedition to the North Sea. Though he worries about his relationship with Penny, she tells him to go on the expedition. Leonard leaves with their relationship seeming secure.

Sheldon and Amy's relationship progresses throughout the sixth season as Sheldon becomes more comfortable being in a committed relationship with Amy. When Sheldon ruins date night by inviting Raj, Amy demands a heartfelt statement of how he feels about her. Sheldon recites romantic dialogue from first Spider Man movie, which Amy says she'll take. When Amy comes down with the flu, Sheldon takes care of her. Hoping to enjoy more of Sheldon's caring side, Amy continues to pretend to be sick. After taking a cheek swab, Sheldon realizes Amy is no longer sick and, to punish her, spanks her.

When Sheldon starts lying to Barry Kripke about Amy and his sex life, Penny asks Sheldon whether he would consider having a sexual relationship with Amy. Sheldon admits he's always been uncomfortable with the sort of physical contact that comes easily to others, but says he's working on it and that it's a possibility. For Valentine's Day, Sheldon makes Amy his "In Case of Emergency" contact at the university. As the gang play Dungeons and Dragons, Amy gets upset at the group's mocking of their relationship. Amy asks Sheldon if he thinks their relationship will ever get intimate. Sheldon tells Amy he doesn't consider their relationship a joke and that he would not rule intimacy out. Sheldon then plays out the love potion scenario of the game with Amy, much to her pleasure.

After meeting at the Comic Book store, Raj starts dating Lucy. Lucy's social anxiety leads her to abandon Raj a number of times, causing him to get depressed. When Raj pushes her too hard, she dumps him leaving Raj devastated. When Penny visits Raj to check on him, Raj is unexpectedly able to talk to her without alcohol.