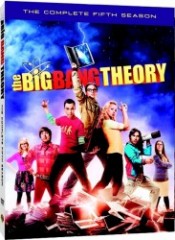 Enjoy the complete fifth season of The Big Bang Theory again with this three-disc DVD box-set. All twenty-four episodes of the show's fifth season are presented along with never-before-seen bonus features.

The Big Bang Theory's fifth season sees more charcacter development as Sheldon settles into his relationship with Amy, Howard and Bernadette's wedding approaches, and Leonard and Penny restart their relationship.

The season starts with Penny and Raj dealing with the aftereffects of their night together. Leonard comes to terms with Priya's decision to move back to India, deciding to try make their relationship work long distance. Howard's pending nuptials suffer a change in trajectory when Howard's asked by NASA to go into space. Leonard realizes he can't have a meaningful relationship with Priya long distance and breaks things off.

In the show's one-hundredth episode, Leonard and Penny decide to start things up again and enter a new "beta test" stage in their relationship. Howard prepares for his space voyage and marriage to Bernadette.