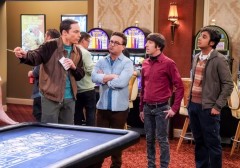 Sheldon goes to Vegas to win money for science. Also, Penny and Bernadette take Amy wedding dress shopping, but her terrible choice entangles them in a web of lies.

1121 - The Comet Polarization
Next Episode 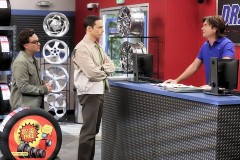 Sheldon: Wow! You look beautiful.
Amy: Really? 'Cause I was gonna return it.
Sheldon: Why would you return it? You look like a pile of swans.

Penny: What if you asked for $20 million?
Sheldon: I'm sorry, I'm trying to do science, not hire Lady Gaga to come to my birthday.
Penny: Do you even know who Lady Gaga is?
Sheldon: Presumably, the wife of Lord Gaga.

Sheldon: This is it.
Pit Boss: Is everything okay, sir?
Sheldon: Oh. Hi. It's better than okay. I am a physicist, and I have been observing this wheel for hours and running a chi-square analysis, which is how I know that the ball is far more likely to land on 32, 17 or five. So if you could hold off on replacing this wheel, I'd like to make several large bets.
Pit Boss: Well, good for you. Pelican.
Sheldon: What's pelican?
Pit Boss: Sir, would you come with us?
Sheldon: Oh, no. I have to place my bet first. This is for science. [carried away by security]
Croupier: 17 black.
Sheldon: No! No!

Penny: Well, do you know how that makes me look?
Bernadette: Uh, that's an easy one: bad.
Penny: Well, why didn't you tell her that you didn't like the dress, either? I mean, what happened to our united front?
Bernadette: I'm sorry. Is this your first day being a girl?

As Sheldon and Leonard play a video game in the apartment, Leonard is puzzled when Sheldon follows the traffic law and stops at a red light in the game, despite driving a stolen cop car with a body in the trunk. When Raj and Howard arrive back from a university mixer, Sheldon claims mixers are a waste of money when the university could instead be funding experiments into his research. They guys can’t see what experiments Sheldon could run as a theoretical physicist, at least ones which would not create an Earth-destroying black hole. Then an idea hits Leonard that Sheldon could create a contained microscopic black hole.

Penny and Amy are looking at bridal magazines in her apartment when Sheldon returns home to ask for advice. He wants to know what he should wear when he goes to ask the university for funding tomorrow. When Sheldon shocks them by saying he will be asking for $500m, Amy tells him they’re not going give him half a billion dollars. Sheldon is insistent he needs that money to solve the contradiction, but Penny argues he can’t ask for that much all at once. Amy tells Sheldon that when you want something big you’ve got to be careful not to scare them away, you’ve got to start small and build up slowly, even if it takes eight years. Sheldon is puzzled by her oddly specific example.

The next day in President Siebert’s office, Sheldon explains the science and why he needs funding of $20m. President Siebert is surprised Sheldon thinks he can build a high-power laser array for that amount of money. Sheldon admits there’s no chance, sayings it’s just a prelude to asking for an additional $50m. Of course, he doesn’t think it’s possible with $70m either. Sheldon slowly builds up to the final figure of “not quite double” $280m.

Back in the apartment, Leonard makes Sheldon a cup of tea as he tells the guys that President Siebert said no. Howard points out this often happens in science; Peter Higgs had to wait 50 years for the supercollider to be built. The guys tell him to be patient and wait for the science to come around or the technology to get cheaper. Worried that while he’s being patient somebody will beat him to the punch, Sheldon says he’s not going to wait for the university to come around. He is determined to find a way to raise the money himself.

At a bridal store, Penny and Bernadette drink champagne while Amy tries on dresses. When she leaves the changing room wearing a dress, they think she looks beautiful. Amy wonders if it’s possible that the first dress she tries on is the dress. Penny and Bernadette urge her to try more. As Amy tries on more dresses, she says she looks amazing in all of these dresses and the girls agree with her. Then, when she tries on one more dress, they hear Amy say this the one, but they’re stunned by its appearance when Amy emerges from the changing room.

When Sheldon goes to the apartment to see Leonard, he asks for his shooting his Kickstarter video. Sheldon doesn’t expect to raise all the money he needs online, but it may help him attract major investors. Meanwhile, Penny chats with Bernadette in her kitchen following their shopping trip with Amy. They both agree that the dress Amy chose is awful, but they fear they can’t say anything to her. Penny thinks Amy would want to hear the truth from her friends, but Bernadette argues that nobody likes hearing the harsh reality. They worry that if they don’t say anything to Amy now, somebody will say something to her at the wedding. Penny and Bernadette agree they should say something, but do it together and do it gently.

In Amy’s apartment, Penny and Bernadette say they want to talk to her about her dress. When Amy asks if they like it, Penny and Bernadette speak at the same time, but give her very different answers. Penny says she doesn’t like it, while Bernadette suddenly decides to say it’s beautiful. When Sheldon goes to Stuart’s store, he asks for help trying to sell some of his comic books to raise money for his research. Sheldon struggles to let go of his prized comic books, but he says science is more important and if this is the sacrifice he needs to make for his research, so be it.

As they leave Amy’s apartment, Penny confronts Bernadette about throwing her under the bus. Bernadette is not apologetic.

At the university cafeteria, Sheldon is eating his lunch of out a brown paper bag as they guys sit down their canteen trays. After Leonard asks how the fundraising is going, Sheldon concedes it’s going badly. When Raj suggests Sheldon think about going to Vegas - Las Vegas - he doesn’t think it’s a terrible idea. While ordinary people might not be able to beat casinos, he claims mathematicians and scientists do it all the time.

When Penny goes to see Amy, she is still upset about her comments about her dress. Penny apologizes, saying she never should have said she didn’t like the dress. Penny tells Amy it’s her wedding and all that matters is she feels beautiful. When Penny wonders why Amy cares what she thinks, Amy tells her she is the coolest, prettiest, best-dressed person in her life. Penny says she got stuck on the fact it’s not a dress she would wear herself, but she tells Amy the wedding is all about her. As Amy starts to feel better about the dress, Bernadette phones to apologize for hanging Penny out to dry and says she doesn’t like the dress either.

When Leonard, Howard and Raj sit down in the cafeteria, they question where Sheldon is as Leonard hasn’t seen him since the morning. Raj wonders if he actually went to Vegas. At a casino, Sheldon has been observing a roulette wheel for hours and knows which number the ball is more likely to land on. When he tells his plan to the pit boss, the guy calls security. They carry him away from the table as the croupier calls the results that Sheldon predicted.

As Sheldon returns to his apartment, a somewhat dejected Amy is wearing her dress and looking at herself in the mirror. When he is stunned by the beauty of her dress, she admits she was going to return it. Sheldon doesn’t see why, proclaiming she looks like a pile of swans. Amy is glad he likes it, saying it’s going to be her wedding dress. When Sheldon says he can’t wait to marry her, Amy wonders why he smells like smoke. Sheldon admits he was in Vegas. Las Vegas.