After Leonard sees Penny with a handsome new mate, he starts up a relationship with Leslie Winkle. Meanwhile, Sheldon is unhappy with the presence of his mortal enemy in his apartment and plots to break her and Leonard up. 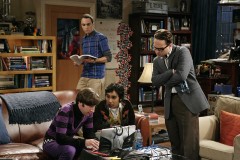 201 - The Bad Fish Paradigm
Next Episode

Sheldon is upset when Leonard tells him he has somebody coming over on Friday night as it will interrupt his regularly scheduled "Vintage Game Night".

Sheldon: Oh Mario, if only I could control everyone the way I control you. Hop, you little plumber. Hop, hop hop!

Howard: Renaissance fairs aren't about historical accuracy, they're about taking chubby girls who work at Kinko's and lacing them up in corsets so tight their bosoms jump out and say "Howdy".
Sheldon: Bosoms would not have said "Howdy" in the 15th century. If anything, they would've said "Huzzah".
Howard: I don't care what the bosoms say, Sheldon, I just want to be part of the conversation.

Penny: Well why don't you go to the movies then?
Sheldon: Because who would be there to perform the Heimlich maneuver if I choke on my popcorn?
Penny: So, don't buy popcorn.
Sheldon: No popcorn at the mo - listen to yourself!

Sheldon: You know, it's amazing how many super villains have advanced degrees. Graduate schools should do a better job of screening those people out.

Penny: Looks like you've been to the Renaissance Fair ... I'm hoping.
Sheldon: Renaissance Fair? More of a medieval-slash-Age of Enlightment-slash-any-excuse-to-wear-a-codpiece fair.

As the guys return home from a Renaissance Fair, they bump into Penny in the hallway with her new boyfriend. His encounter with Penny leads Leonard to consider whether he should start dating again. When Leslie Winkle suggests she's ready to start dating, Leonard starts up a relationship with Sheldon's sworn nemesis.

On the night of Leonard's date with Leslie, Sheldon must make himself scarce despite his desire to play N64 SuperMario. When Penny returns home from work, she finds Sheldon in the building's stairway playing a SuperMario emulator on his laptop. Sheldon explains he's there because Leslie will be in the apartment with Leonard. At the end of Leonard and Leslie's date, they encounter Penny and her boyfriend in the hallway and try to "out kiss" them.

On another date night for Leonard and Leslie, Sheldon is again playing Mario on the stairs. When Penny comes by, Sheldon tells her that he would prefer she was dating Leonard and that she should give their relationship another try. Penny tells Sheldon that despite his frustrations, he should accept Leonard's relationship with Leslie because Leonard is his friend.

Sheldon interrupts Leonard and Leslie's date to announce he will withdraw his objections, but his insult to Leslie sparks a debate about loop quantum gravity and string theory. When Leonard doesn't back up Leslie's scientific viewpoint, she calls the relationship off.