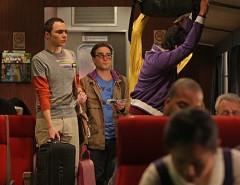 When the guys take a trip to San Francisco for a physics convention, they are stunned to discover Summer Glau is a passenger on the train. Leonard, Howard and Raj each take turns trying to impress the Terminator: The Sarah Connor Chonricles star. Meanwhile, after Sheldon realizes he left an important flash drive at home, his disappointment soon turns to annoyance when he must contact Penny to retrieve a document on the flash drive.

Guest Stars: Summer Glau as Herself, Dr. George Smoot as Himself 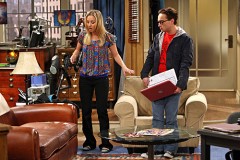 216 - The Cushion Saturation
Next Episode

Sheldon: She calls me moon-pie because I'm nummy-nummy and she could just eat me up.

Leonard: Well, it looks like you're caught between a rock and a crazy place.
Sheldon: I hate when that happens.

Sheldon: No one calls me Moon Pie but Meemaw.

Penny: Okay, I got a box, but there's no key in here. Just letters.
Sheldon: That's the wrong box. Put it back.
Penny: Oh, Sheldon, are these letters from your grandmother?
Sheldon: Don't read those letters.
Penny: Oh, look, she calls you Moon Pie. That is so cute.
Sheldon: (shrieking) Put down the letters!

The guys are attending a physics conference in San Francisco and, after a vote in which only Sheldon supported going by train, they're taking the train. When the guys board the train, they notice Summer Glau, star of Terminator: The Sarah Connor Chronicles, is on board. Raj, Howard and Leonard fight over who will be first to go chat to her. Meanwhile, Sheldon has bigger problems on his mind when he realizes he's left his flash drive, which contains a document he wants to present to Nobel prize winner George Smoot, at home.

Howard goes first to talk to Summer Glau but loses his nerve, so Raj swoops in and steals his pick-up line. After Leonard dismissed the idea of going back for the flash drive, Sheldon decides to call Penny to try get her to email him his document. Raj, with the help of liquid courage, is chatting to Summer Glau and, somewhat surprisingly, she seems charmed by him. When Howard discovers Raj is drinking non-alcoholic beer, he soon pops his friend's bubble and takes over the conversation.

Sheldon is struggling to convince Penny to help him out as she keeps putting him on hold. Sheldon then has to talk her through the process of retrieving his flash drive, which includes Penny going into his room. While in his room, Penny finds a bunch of letters from Sheldon's grandmother who refers to him as "Moon Pie". Back on the train, Howard's lost his way with Summer Glau and, after a boring conversation, he flatly asks her whether he has a chance. She lets him down gently, but Howard tries his luck at getting a photo with her and she breaks his phone.

Leonard, having witnessed his two friends crash and burn with Summer Glau, now sees his opportunity and goes over to talk with her. Unfortunately, the train just pulled into her stop and she quickly exits the train. Penny has emailed Sheldon his document. When Sheldon arrives at the conference, he discusses his paper with an annoyed and bemused George Smoot who asks whether Sheldon is on crack.