A large array of Official Big Bang Theory T-Shirts have been released recently and we want to show you a few of them today. There are some great new designs that have just been launched. 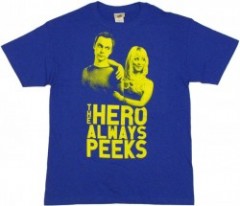 This blue t-shirt is the first to feature just Penny and Sheldon. The shirt reads "The Hero Always Peeks", a reference to the time Sheldon had to help Penny dress herself in the fan favorite "The Adhesive Duck Deficiency" episode. This t-shirt is sure to be a favorite of Sheldon-Penny "shippers". Now available at StylinOnline.com and also in female/junior size. 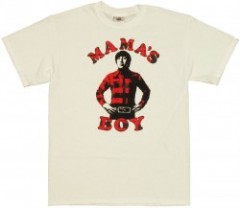 This is only the second official t-shirt to feature Howard solo. The white shirt features Howard, wearing a red plaid shirt and standing proudly, and the text "Mama's Boy" in the same red plaid design. Availabe now from StylinOnline.com and in female/junior size. 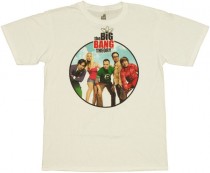 This is the only official t-shirt to feature the whole gang. This white shirt features Sheldon, Leonard, Penny, Howard and Raj in a circle with The Big Bang Theory logo above them. Available now from StylinOnline.com and in female/junior size.

We hope you enjoyed this recap of the latest Big Bang Theory shirts. You can view all of the official t-shirts in our clothing area, including a few new designs not shown here.