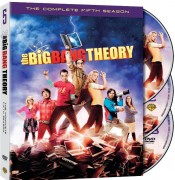 To celebrate the upcoming release of The Big Bang Theory: Season 5 DVD and Blu-ray, we are giving away a free copy of the DVD (Region 1, US release). The box-set includes all twenty-four episodes of the 2011/12 season plus new bonus features.  Enter our contest now for your chance to win!

In the United States and Canada, The Big Bang Theory: Season 5 will be released on both DVD and Blu-ray on Tuesday, September 11. The five-disc Blu-ray combo pack includes the episodes on both high-definition Blu-ray and standard-definition DVD.