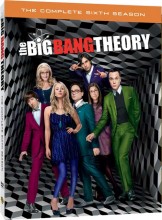 Warner Home Video has announced the release of The Big Bang Theory: Season Six DVD and Blu-ray this fall in the United States and Canada. The box-sets will be released in North America on Tuesday, September 10.

The three-disc DVD and five-disc Blu-ray will include all twenty-four episodes of the show's latest season. The Blu-ray set includes the episodes on both high-definition Blu-ray, standard-definition DVD and UltraViolet downloads. The downloads are only available in the USA and must be redeemed within two years of the release date.

The bonus features are "One Small Step for Wolowitz, one Giant Leap for Primetime,  a look at Howard's space mission with the cast and real-life astronauts; "Houston, We Have A Sit-Com", a feature about the cast surprising Astronaut Joe Acaba with a live Skype chat as he orbits the earth in the International Space Station; "Electromagnetism", four featurettes looking at the season's best relationship moments; a Gag Reel, and the 2013 Paley Festival Q&A.

The Big Bang Theory: Season 6 DVD and Blu-ray sets will be released in Australia on September 18. Both the DVD and the Blu-ray also include UltraViolet downloads of the episodes. You can pre-order now from MightyApe.com.au.