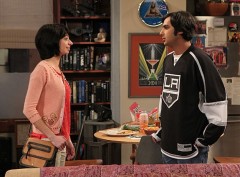 Kate Micucci, who had a recurring role as Lucy - Raj's love interest - during The Big Bang Theory's sixth season, is set to reprise her role during the show's upcoming seventh season, according to an exclusive in The Hollywood Reporter.

The Hollywood Reporter reveals Micucci will appear in the eighth episode of the new season. Lucy will bump into Penny in the episode, but it's not known whether Raj and Lucy will meet each other.

Read the full story at The Hollywood Reporter