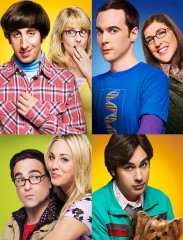 CBS became the first network to announce their 2015 fall premiere dates today, announcing that The Big Bang Theory will return for its ninth season on Monday, September 21 at 8/7c. For the first time since the sixth season premiere in 2012, the show will return with a half-hour premiere rather than a double bill of episodes.