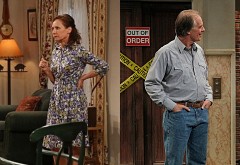 Laurie Metcalf and Keith Carradine will be guest starring in upcoming episodes of The Big Bang Theory, according to EW.com's Spoiler Room.

Laurie Metcalf, who plays Mary Cooper, last appeared in the penultimate episode of Season 8, "The Maternal Combustion". The actress, best known for her role as Jackie Harris on the long-running sitcom Roseanne, has so far appeared in seven episodes as Sheldon's devout Texan mother since the show's first season.

Keith Carradine is also set to reprise his role as Penny's father, Wyatt, in an upcoming Season 9 episode. The Nashville and Madam Secretary actor appeared in the fourth season episode "The Boyfriend Complexity", back when Leonard and Penny were broken up.

Get the full scoop at EW.com