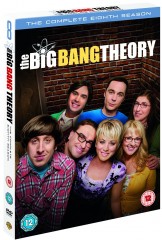 To celebrate the release of The Big Bang Theory: Season 8 on DVD and Blu-ray in the UK, we have a copy to give away to one lucky fan. Please note, this contest is only open to residents of the UK.

The three-disc DVD box-set and two-disc Blu-ray box-sets were released on Monday, September 14 in the UK and include all twenty-four episodes of the show's latest season. The bonus features include a gag reel, footage from The Big Bang Theory's 2014 panel at Comic-Con, and four behind the scenes featurettes: "Shooting Stars: BBT on BBT", "Constellation Prize", "Here's To You, Carol Ann Susi", and "It's A Quark ... It's An Atom ... It's the #BBTSuperfans".

The Big Bang Theory: The Complete Eighth Season is out now on Blu-ray and DVD.

Enter our contest now for your chance to win The Big Bang Theory: Season 8 DVD