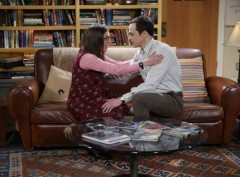 Sheldon and Amy will take their relationship to the next level in a December episode, showrunner Steve Molaro confirmed after an episode taping on Tuesday. The pair, whose relationship has been on hold so far this season, will reportedly get intimate in the December 17 episode.

"After over five years of dating, we felt the time was right for Sheldon and Amy to finally consummate their relationship, and we're so excited for the audience to see the journey over the next several episodes", showrunner Steve Molaro said in a statement.

Bob Newhart will reprise his role as Professor Proton/Arthur Jeffries in the episode, appearing to Sheldon as a Jedi just as he did in "The Proton Transmogrification". The Star Wars bent to the episode will come just hours before the new film, Star Wars: The Force Awakens, opens in cinemas.