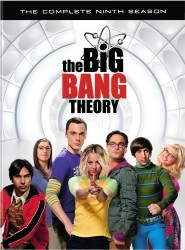 Fans in Australia and New Zealand have just a little longer to wait as Season 9 is released on DVD and Blu-ray there in two days' time, on Wednesday, August 31.