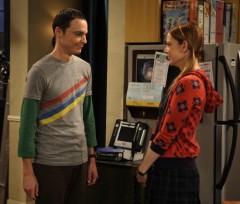 As the season draws to a close, CBS has revealed the season finale storylines for its shows including The Big Bang Theory. The show's tenth season finale will air Thursday, May 11 with a character from the past set to return. Riki Lindhome will be reprising her role as Ramona Nowitzki, last seen in the Season 2 episode "The Cooper-Nowitzki Theorem".

THURSDAY, MAY 11 - THE BIG BANG THEORY (8:00-8:31)
The gang is concerned when Sheldon’s (Jim Parsons) former admirer, Dr. Ramona Nowitzki, resurfaces while Amy (Mayim Bialik) is away at Princeton.

Although the tenth season of The Big Bang Theory is almost over, there's no need to worry as the show was recently renewed for another two seasons by CBS. The Big Bang Theory will return for its eleventh season this fall on CBS. A new TBBT spin-off, Young Sheldon, focusing on the life of a nine-year-old Sheldon growing up in East Texas, was also picked up for the 2017/18 season.