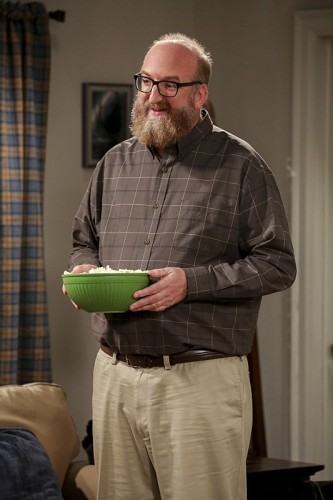 Bertram “Bert” Kibbler is a geologist at Caltech and a musician in Footprints on the Moon.

He is a winner of the MacArthur Fellowship, sometimes referred to as the Genius Grant, for his study on the way microbes in rocks can survive in extreme environmental conditions. The prize came with an unconditional grant of $500,000.

Bert was first seen in the episode “The Contractual Obligation Implementation” when he tried to join Raj at a table in the library where Raj was to have a “text date” with his then-girlfriend Lucy. Raj told him to “go climb back up whatever beanstalk you came down from.”

In “The Occupation Recalibration”, we learned Bert was a geologist the same university as Amy and the guys. Bert had been bringing Amy beautiful rocks every day, but she hadn’t realized he had a crush on her. When Howard and Raj point out that Bert’s infatuated with her, Amy tasked them with letting him down gently. After Bert invited Amy to join him at a rock show, Howard and Raj instead accompanied Bert.

When Bert invited Amy to a house party in “The Dependence Transcendence”, she and her guest Penny were the only people to show up. It wasn’t a wasted experience for them as they found out that Bert and others at the university consider Amy to be the cool girl on campus. When Penny made a geology joke, Bert admitted he is now in love with her and Amy.

Bert was one of the guests invited to Sheldon and Amy’s first dinner party in “The Fetal Kick Catalyst”, but the party was marred by Sheldon’s admission that their guests were the “practice round”. Still, Bert said they served the best blintz he’d ever had, which almost made up for that incredibly awkward turn.

When Bert won the MacArthur Fellowship for his work in “The Geology Elevation”, Sheldon was jealous at being upstaged by a geologist. After a string of self-inflicted injuries as he wallowed in envy, Sheldon finally talked to Bert about his feelings. Bert tried to help Sheldon work through his emotions, but Sheldon was further incensed when Bert said he’s no longer jealous of Sheldon and Amy as, with his grant money, he thinks he can now do better. Later, Sheldon and Bert attended a taping of the Ellen chat show together.

Sheldon and Amy ran into Bert on their date night in “The Allowance Evaporation”. Bert admitted he’d been stood up again, but Amy’s soon more bothered about the inappropriate details Sheldon had been sharing about their relationship.

When the gang met Bert’s attractive new girlfriend in “The Separation Agitation”, they feared she was only with him for his money. The gang helped him see her true colors, but Bert was lonely enough that he thought buying her love was better than being alone.

In “The Gyroscopic Collapse”, Raj revealed that he was moving out of Leonard and Penny's apartment to move in with Bert, who was renting a room out above his garage.

In “The Geology Methodology”, Bert asked Sheldon to work with him to look for signs of neutrino interactions in four-billion-year-old meteorites. Despite Sheldon's clear interest in the research which could find signs of dark matter, he was so embarrassed about working with a geologist that he tried to keep his work with Bert secret. Fed up with Sheldon's snide comments about him and geology, Bert chose to dump Sheldon and work with Leonard instead. When Sheldon apologized to Bert, he accepted but decided to keep working with Leonard anyway.

When Howard needed time away from Footprints on the Moon in “The Solo Oscillation”, Raj reached out to Bert, who plays guitar, to join the band as a replacement. Bert already had a geology-inspired song of his own, told from the prospective of the boulder that chases Indiana Jones, which fit the band's sound. After Howard returned to the band, the trio played at a Bar-Mitzvah where Bert performed his original song.