When Sheldon proves to be a distraction to Leonard and Howard as they work on the military project, they find a way to keep him occupied but his absence threatens to derail the project after Colonel Williams demands the gyroscope be made smaller.

Meanwhile, Penny and Amy take Bernadette on her first girls' night out since Halley was born, leaving Raj and Stuart to look after the baby. 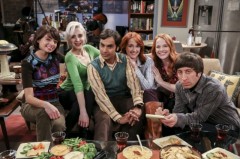 1014 - The Emotion Detection Automation
Next Episode

Howard: How'd you even get that up the stairs?
Sheldon: I said to myself, "I think I can, I think I can." And then I couldn't, so I paid two men who promised not to come rob us later.

Howard: The kid with the two shirts screwed us again.

Leonard: You know, I do have a way to get him out of our hair. I've been holding onto this for a few years, but maybe now's the time.
Howard: We can just lock the door; you don't have to kill him.
Leonard: You can't kill him; he'll just respawn at the last save point.

Leonard: I got it.
Howard: You really figured it out?
Leonard: No, but when we show this nonsense to Sheldon, it will make him crazy, and he'll have to fix it.
Howard: Oh, you're a genius.
Leonard: Yeah, I know. That's not even a math symbol. That's just Charlie Brown's hair.

As Howard, Sheldon and Leonard work on the gyroscope project in the lab, Sheldon says he’s been looking at the math and he thinks they can make it 8-10% smaller. Leonard and Howard don’t think it needs to be smaller as the Air Force has already signed off on the specs. Howard and Leonard tell Sheldon his work is done so he should go home.

Howard and Leonard are enjoying peace and quiet in the lab as Sheldon takes a bathroom break. Howard confides in Leonard that he’s been secretly filling up Sheldon’s cup so he has to go to the bathroom more often. Leonard remembers that he has a way to get Sheldon out of their hair which he’s been holding onto for a long time. When Sheldon returns, Leonard gives him a present: tickets to the ultimate train experience at the Nevada Northern Railway. Sheldon is ecstatic at the prospect of getting be a train engineer for the day. After Sheldon hugs Leonard, he has to tinkle again. Leonard and Howard return to work.

Penny, Amy and Raj are with Bernadette in her kitchen as she’s filling out preschool forms for Halley. Bernadette is cranky when Raj says she should have done this before the baby was born. Bernadette apologizes and explains that she’s had a lot going on since Howard went back to work. When Halley cries over the monitor, Raj goes to take care of her. Penny proposes a girls’ night out to give Bernadette a break from being a mother.

When Amy arrives home, she finds Sheldon unexpectedly home from work and looking at his iPad. After Sheldon tells Amy about Leonard’s gift to him, he also informs her that she gets to take him on a four hour drive from the airport to the railway. Sheldon can’t stop talking about trains - even as Amy gets ready for bed and later tries to sleep. By the time morning comes around, Sheldon still hasn’t stopped talking.

The next day, Howard and Leonard are back at work and are pleased with how their Sheldon distraction worked out. When Colonel Williams arrives to check on their progress, he sees the math on Sheldon’s board that would allow them to make the system smaller. Colonel Williams wants it. Leonard and Howard try to talk Colonel Williams out of it, but he won’t budge; he wants the smaller system.

In Howard and Bernadette’s living room, the girls are dressed up and about to leave for their night out, leaving Stuart and Raj staying to look after Halley. Bernadette wants them to call her if there are any problems. After the girls leave, Raj and Stuart agree to split baby chores instead of arguing all night. Raj agrees to take feeding the top half, leaving Stuart to deal with whatever comes out of the bottom half.

Howard and Leonard climb the stairs of the apartment building to ask Sheldon to come back to work. When they reach the apartment, they hear weird electrical sounds and decide to go inside and investigate. In the apartment, Sheldon is welding on a gigantic engine. When they tell Sheldon that Colonel Williams wants the guidance system made smaller, Sheldon says he can’t go back to theory now he’s discovered the joy of engineering.

After Leonard tells Sheldon he can still go on the railroad trip in a few weeks, Sheldon says he needs to learn more about working on an engine to avoid looking foolish. When Leonard wonders why Sheldon is being like this when he knows he won’t be leaving physics behind, Sheldon explains the excitement he’s experienced from doing practical work.

As Penny drives Bernadette and Amy to a club, Amy asks if Bernadette has heard back from the pre-school. Penny asks for no more pre-school talk because tonight is about having fun. The fun is interrupted when Bernadette gets a call from Raj and Stuart, who are arguing over whether the breast milk is off. After she tells him there’s extra milk frozen in the freezer, Raj agrees to defrost it, while Stuart is more bothered about wasting perfectly good milk.

In the apartment, Leonard and Howard are recreating Sheldon’s work on a whiteboard, but they don’t understand it at all. Leonard has an idea: he draws meaningless squiggles - including Charlie Brown’s hair - on the board, and says he’ll show it to Sheldon who will feel compelled to correct it.

In the car, Penny apologizes that the club isn’t there any more; it’s now a bookstore. Bernadette gets another call from Raj: Halley’s been crying for a while, ever since Raj woke her up taking a selfie, but Stuart eventually manages to calm her down. When Penny wants to call it a night, Amy and Bernadette say are all dressed up and want to go out. Penny admits she’s not in the mood any more, saying it feels like a sad attempt to recapture their youth. When Bernadette and Amy say they’re not sad, Penny admits that she feels sad that she and Leonard have been married for two years and no further along, especially compared to where Howard and Bernadette are now. Bernadette says that being a parent and dealing with adult things isn’t fun, it’s terrifying. As Amy and Bernadette point out the great things about Penny’s life, Amy starts to feel depressed about her life and relationship with Sheldon. After Amy starts to cry, Penny begins to sob, causing Bernadette to lactate.

Leonard and Howard take their whiteboard across the hall to 4B to show Sheldon, but Sheldon is not interested in even looking at their work. When they finally get Sheldon to look it over, he tells them they’re wrong. When they ask him to fix it for them, he finishes drawing Charlie Brown on the squiggle that Leonard had put on the board. Leonard tells Sheldon he can’t turn his back on physics, especially since he has no idea what he’s doing with the engine. Howard offers to help him learn more about engineering out if he’ll come back to the project. Sheldon agrees to come back, but first he asks them to move the engine downstairs before Amy gets home.