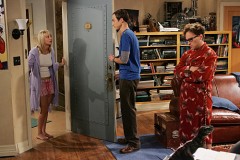 Leonard hopes to make a good impression with Penny by volunteering to sign for a package of hers. When Leonard and Sheldon move the package to her apartment, Sheldon is disturbed by her apparent lack of tidiness. Sheldon's inappropriate mission to tidy Penny's apartment lands him and Leonard in hot water with her. 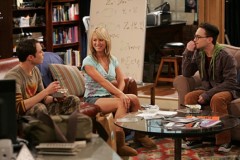 Penny: Yes, I know men can't fly.
Sheldon: No, no let's assume that they can. Lois Lane is falling, accelerating at an initial rate of 32ft per second, per second. Superman swoops down to save her by reaching out two arms of steel. Ms. Lane, who is now traveling at approximately 120 miles per hour, hits them, and is immediately sliced into three equal pieces.
Leonard: Unless Superman matches her speed and decelerates.
Sheldon: In what space, sir, in what space? She's two feet above the ground. Frankly, if he really loved her, he'd let her hit the pavement. It would be a more merciful death.

Sheldon: I have a masters and two PhDs. I should not have to do this.

Howard: Grab a napkin, homey, you just got served.
Leonard: That's fine, you win.
Howard: What's his problem?
Sheldon: His imaginary girlfriend broke up with him.
Howard: Been there!

Penny: And what kind of doctor removes shoes from asses?

Penny asks Leonard if he would be able to sign for a package when she's out. After the package arrives, Leonard and Sheldon struggle to move the heavy item up the stairs. Once they managed to get the item to Penny's apartment, Sheldon is shocked to discover how untidy Penny's apartment is.

Later that night, Leonard is woken up by sounds coming from the apartment. Leonard leaves his bedroom, with a lightsaber to protect him, to find out what the noise was. Noticing the apartment door is open, Leonard ventures across the hallway and finds Sheldon cleaning Penny's apartment. Although Leonard objects to Sheldon's intrusion, he nontheless helps his friend tidy up.

The next morning, as Leonard and Sheldon talk in the kitchen and Sheldon prepares his cereal, Penny wakes up and finds her apartment has been tidied. Quickly realizing it was the guys across the hall, Penny shouts "You sick geeky bastards!" Penny comes to the guys apartment to confront them about their behavior.

Later, Penny runs into Raj in the hallway and talks through the problem with him, though the mute Raj has little to contribute to the conversation. After her chat with Raj, Penny chooses to forgive Sheldon and Leonard. Leonard goes over to apologize to Penny, and she accepts. Later, the guys help Penny set up her media center, though their desire to complicate the matter leaves Penny doing much of the heavy work.