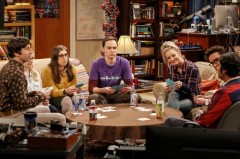 After Sheldon gets stressed out about picking the perfect date for his and Amy's wedding, she overhears him talking in his sleep and believes there's another, more relaxed side to Sheldon.

Meanwhile, when Bernadette mentions going for drinks with her new co-worker, Ruchi, Howard has the idea of trying to fix up their two single friends, Raj and Stuart, with her.

1102 - The Retraction Reaction
Next Episode

Bernadette: One of the great things about being pregnant is drinking cranberry juice out of a wineglass and watching people freak out.

Penny: Is it possible that you're stressed because you're scared about getting married? I mean, it is a big change, and you're not good with little changes.
Sheldon: Well, that's nonsense. You name one little change I was upset with.
Penny: Uh, when they changed the green Skittle from lime to apple.
Sheldon: That is not the rainbow I grew up tasting.

Sheldon: Why can't there just be one week each month for famous people to die?
Amy: Well, they've already arranged to die in threes. What more do you want from them?

Howard: It's a date. Just pick one.
Sheldon: It's not just a date, it's a textbook optimization problem. There is a perfect date. Just like there's a perfect room temperature and a perfect dessert.
Penny: Mm. There's no perfect dessert.
Sheldon: Yellow cake in the shape of a dinosaur with chocolate frosting, a scoop of vanilla ice cream on the side, not touching. You'll see. You'll have it at our wedding.
Amy: You wanna bet?

As the gang play cards in the apartment, Sheldon mentions how he has sent them all a “Save The Date” reminder for his and Amy’s wedding, only he is requesting that they block out eighty different dates. They all think Sheldon should just pick one of the dates, but he sees it as his task to find the perfect date for their wedding.

As Sheldon tosses and turns in bed, he dreams about waking up the next morning and being easy going with Amy when she mentions they’re out of his designated breakfast cereal. Sheldon isn’t bothered, exclaiming “Whatev!”, and instead starts playing smooth jazz. When Amy wakes up next to Sheldon in bed, he is humming the same jazz tune in his sleep.

At breakfast time in Howard and Bernadette’s kitchen, she reminds him she’s going out for drinks after work with a new colleague. When Howard hears Bernie’s co-worker is a woman, he wants to try set her up with Raj or Stuart, but Bernadette wants this woman to like her. Meanwhile, when Amy joins Leonard and Penny at their breakfast table, she mentions how Sheldon was sleep talking and showed a different, laidback side of himself. Amy thinks the wedding planning has been really stressful for him and points out that stress can trigger sleep talking. Penny suggests that this might just be another part of Sheldon’s personality that he’s been repressing, but might secretly want to be.

As Bernadette talks with her new co-worker, Ruchi, at a bar, Ruchi mentions how hard it’s been move to a new city, but at least her co-workers are nice. The pair are interrupted by the arrival of Raj and Stuart, who introduce themselves to Ruchi. Bernadette is not pleased that Howard sent them her way. Elsewhere, Amy arrives home to find Sheldon still obsessing about finding the perfect wedding date. He is upset that the best date he found was in 1996, and even then he quickly realizes it was also the day a Doctor Who actor died. Amy tries to help Sheldon relax instead of stressing about the best wedding date.

Back at the bar, Raj and Ruchi are talking about India when Stuart tries to jump into the conversation. After Ruchi changes the subject and asks them about their jobs, Raj talks about his career and tries to make Stuart’s sound bad. Later that night, Amy is recording Sheldon as he talks in his sleep again and is remarkably relaxed.

The next day, Amy plays the recording back for Leonard and Penny. As Amy explains she hasn’t played it for Sheldon as he might feel she violated his privacy, he arrives in the apartment and wonders what they were listening to. When Sheldon says the guy on the tape sounds like an idiot, Penny points out that it’s him. Sheldon is upset that Amy spied on him in his sleep and insists the carefree sleep talk doesn’t mean anything.

At the comic book store, Howard and Leonard are talking as they browse, while Raj and Stuart argue about Ruchi. Raj wants Stuart to bow out of the race to impress Ruchi because he thinks they would have more in common. When they realize they both want to ask her out, they agree to hang out together with Ruchi as friends.

When Penny goes down to the laundry room, she is surprised to find Sheldon doing laundry on a Wednesday night. After Sheldon explains that it’s part of the madness his life has become, Penny can’t believe Sheldon is so wound up about his sleep talking. Sheldon admits that he is concerned that his mind is keeping an entire personality from him, but Penny thinks he might just be stressed about the thought of getting married. Penny argues that his sleep talking is just his brain’s way of telling him everything will be okay if he relaxes. To help him out, Penny suggests he make a small change to try lighten up - perhaps trying yoga or learning to meditate. Sheldon admits he has always been intrigued by flip-flops, the official footwear of the laid back fellow. Of course, he would need a tetanus booster, and while he’s there might as well get a flu shot and a mole check.

At the bar again, Ruchi tells Raj she’s sad that Stuart couldn’t make it. When Stuart arrives, he is upset that Raj deliberately did not invite him. After Ruchi takes a phone call while Raj and Stuart argue, Stuart tells her how Raj didn’t tell him about this evening. Realizing they are both seeking more than friendship with her, Ruchi tells them she isn’t looking for a relationship. Stuart tells her that if she still wants to hang out as friends, he would like that.

Back at their apartment, Sheldon arrives home in a state of distress with a bag over one foot and the other in a backpack, along with dirt marks and cuts all over his body. After Amy notices how bad he looks, Sheldon tells her the harrowing story of what happened; everything stemming from his fateful decision to wear flip-flops. When Amy asks if there’s anything she can do to help, Sheldon says he wants her to be in charge of the wedding - including deciding the date and location. Amy mentions how she has dreamed of a June wedding, perhaps on a cliff side, ever since she was a young girl.

As Sheldon sleeps, he dreams he is presiding over a “Council of Sheldons” meeting with his other personalities: Science Sheldon, Texas Sheldon, Fanboy Sheldon, Germaphobe Sheldon, Humorous Sheldon, and Laidback Sheldon. The issue of the day is whether to admit Laidback Sheldon to their group, a motion they vote against.