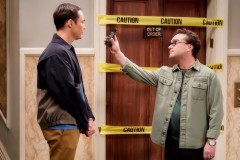 Penny gets the opportunity to host Bill Gates at work when his company wants to partner with her pharmaceutical company. Also, Leonard, Koothrappali and Wolowitz do everything in their power to meet him, while Sheldon thinks he is the victim of an April Fools prank.

Guest Stars: Kevin Sussman as Stuart, Bill Gates as Himself

1117 - The Athenaeum Allocation
Next Episode

As Raj and Howard talk about the Bat-Signal and how part of its purpose is also to strike fear in the hearts of Batman's enemies and let them know he's coming, Leonard says that's sort of like Sheldon's knock.

Sheldon: You know what they say, fool me "N" times, where "N" equals the amount of times you've already fooled me, shame on you. Fool me "N" plus one times, shame on me.

Penny: I'm not leaving you for Bill Gates.
Leonard: You sure? I bet his Internet's really fast.

Leonard: Uh, M-Mr. Gates, I'm-I'm Dr. Leonard Hofstadter. We've actually met before.
Bill Gates : Sorry, I don't remember.
Leonard: You were so nice, a-and it was really special to me because you've been such a big influence on my life. I mean, ever since I was a little kid, I've looked up to you like-like a hero. (sobbing)
Bill Gates : Oh, now I remember. Would you like a tissue?
Leonard: How about a hug?
Bill Gates : How-how about a tissue?

Raj: But why do they still call Batman using the Bat-Signal? Wouldn't it just be, like, easier to text him?
Howard: The Bat-Signal isn't just to alert Batman, it's also to strike fear in the hearts of his enemies and let them know he's coming.
Leonard: Sort of like Sheldon's knock.
Sheldon: Comparing me to Batman? I'll take it.

Amy: So, what are we watching?
Bernadette: Bob the Builder. I'll catch you up. That one's Bob. He's a builder.
Amy: Isn't this a kids show?
Bernadette: It's what we watch in this house. Bob the Builder, Dinosaur Train, and Peppa Pig, which is both funny and meaningful.

As the guys eat in the apartment and the girls stand at the breakfast counter, Raj and Howard debate the Bat Signal. To put a stop to their endless talk about Batman, Penny mentions that she will be meeting Bill Gates at her work. When he hears Bill Gates will be arriving in Los Angeles on Sunday, April 1, for a meeting on Monday, Sheldon thinks it’s another “classic prank” by Penny for April Fools’ Day. Penny is confused as she has never pranked Sheldon, but Leonard stops her when she tries to explain to Sheldon it’s real.

Later that night, as Leonard and Penny clean up the apartment, Leonard tells Penny he’s a bit jealous about her meeting Bill Gates. When he asks if he can come along, Penny says she can’t turn it into a social situation. She is hoping to do a good job as there’s a PR position opening up at the company that she wants to be considered for. Leonard is disappointed but concedes he has already met Mr. Gates once before. Leonard explains his mother took him to Princeton to see Mr. Gates give a speech, after which Leonard become overly emotional in front of his idol.

Bernadette says bye to her babies as Stuart takes them for a walk in a double stroller. When Amy comes over, she is confused by Bernadette’s use of baby talk. She’s even more thrown by Bernadette watching a kids TV show, without the kids. Elsewhere, when Penny goes to the laundry room, Sheldon tells her he’s folded her laundry for her. After Penny points out it’s not hers, she wonders why Sheldon is acting so weird. Sheldon says he’s wondering whether Penny was actually telling the truth, Penny insists Bill Gates is really coming but Sheldon still doesn’t fully believe her.

At a restaurant, Bernadette thanks Amy for getting her out of the house. After explaining that she doesn’t want to be one of those moms that only talks about her children, Bernadette does exactly that, driving Amy to exhaustion. Back at the apartment, Leonard, Howard and Raj are playing a video game when Penny says she’s going to the office to prepare for tomorrow’s meeting with Bill Gates. After Howard and Raj plead with her to introduce them to their idol, Penny says there wouldn’t be the time and shows Leonard the schedule for tomorrow. After she leaves, Leonard tells the guys he knows the hotel where Bill Gates is staying, waiting a few moments before they rush out to try meet him.

As the guys wait around in the hotel lobby, they talk about what they would do with a billion dollars. Leonard has second thoughts, admitting he feels guilty about sneaking around behind Penny’s back, but at that moment they see Bill Gates emerge from a room. Leonard goes over to see him and introduces himself, mentioning that they have met before. Mr. Gates is apologetic about not remembering him, but when Leonard starts sobbing the memory comes flooding back. Mr. Gates offers him a tissue, although Leonard says he would prefer a hug.

When Bernadette arrives back home with Amy, she apologizes for constantly talking about her kids. After Bernadette admits that she worried about what’s happening to her, Amy tells her not to be so hard on herself as pregnancy and childbirth actually lead to structural changes to the brain. Amy argues these are positive changes as they might make her more compassionate and better at multitasking.

After Sheldon walks into the apartment building, Leonard yells for him to hold the door but he carries on. When Leonard finally gets inside, Sheldon asks him where he’s been. After Leonard says he met Bill Gates, Sheldon thinks he’s in on the joke, so to prove it Leonard shows him a picture of him and Mr. Gates. When Sheldon realizes it wasn’t a joke and he could really have met Bill Gates, Leonard then gives him false information on where to meet Mr. Gates.

When Leonard enters the apartment, Penny asks if the guys are still mad at her for not introducing them to Bill Gates. Leonard is befuddled when Penny tells him that there’s going to be a reception for Mr. Gates and she is allowed to take him along. Elsewhere, as Howard walks into his living room, he can hear Bernadette reading a very technical book to the kids over the baby monitor. When she comes downstairs, Bernadette explains that Amy told her new mothers are cognitively primed to take in new information and she thinks she’s been wasting that ability so far.

At the comic book store, Leonard tells Howard & Raj that he’s screwed because Bill Gates will recognize him when they meet again at the reception. After Sheldon arrives and is angry at Leonard for lying to him about Bill Gates’ location, the guys lie to him again about the location of the hotel.

Back in the apartment, Leonard is sitting on the couch draper in a comforter as Penny is dressed up and ready to leave. He says he’s too sick to go with her. Elsewhere, Amy and Bernadette are eating at a restaurant again, but this time Bernadette is talking Amy’s head off about science matters. Realizing it’s going to be a long night, Amy decides to order a whole bottle of wine.

As Leonard plays a video game, he receives a video call on his laptop from Penny. After he quickly sits back down on the couch and covers up in the blanket, she asks how he’s doing and tells him she has a surprise for him. She turns the camera over to reveal Bill Gates, who recognizes Leonard as the person from the hotel who ruined his tie.

An angry Sheldon returns to the apartment building from another fruitless quest to meet Bill Gates. When he passes Leonard’s apartment, there’s an note on the door saying “I’m Sorry”. Sheldon is soothed by the gesture, which he presumes is for him, and goes inside to find Leonard has set out a romantic meal and has bought flowers. Sheldon tells Leonard he can’t stay mad at him and sits down for the dinner.