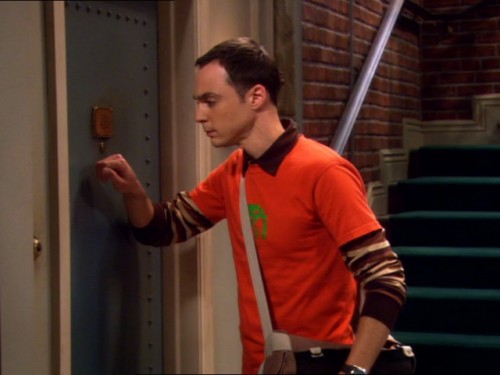 Sheldon exhibits a repetitive, ritualistic pattern when he knocks on doors, and sometimes even other objects.

Sheldon's knock consists of three knocks, followed by the calling out of the person's name, which he performs three times for a total of nine knocks. Sheldon's knock is most associated with him going across the hall to Penny's apartment.

Sheldon is uncomfortable when he is interrupted mid-knock. Amy described Sheldon's knock as a sign of obsessive compulsive disorder, although Sheldon was dismissive of this diagnosis.

At the start of the series, Sheldon had an indistinct knock. By the tenth episode, a characteristic knock was beginning to form. In that episode, The Loobenfeld Decay, Sheldon performed a similar knock, only with four knocks before Leonard's name, when he went to wake Leonard up in the middle of the night.

The first episode to feature Sheldon's knock, as it would become, was the second season episode The Euclid Alternative, when Sheldon went to Penny's apartment to ask for a ride to work. Chronologically, the first time Sheldon used this knock was in a flashback scene in The Staircase Implementation, which took place in a time before the show began.

In The Cohabitation Experimentation, Sheldon wondered whether he would have to knock on the door of Apartment 4A if he made Apartment 4B his official residence. Later in the episode, Sheldon entered his old apartment without knocking, but then repeated the phrase "I didn’t knock, but it's fine" in a three-part pattern similar to his knock.

In The Hot Tub Contamination, Sheldon told Penny about a traumatic incident that happened when he was a child. While his mother was at bible study, Sheldon walked into his home and heard a noise coming from his parents' bedroom. When he went into the room, he found his father having relations with another woman. Sheldon explained to Penny that it's the reason why he never opens a door without knocking three times. "I mean, the first one's traditional, but two and three are for people to get their pants on."

Sheldon has not yet fully developed his ritualistic knock on Young Sheldon. He still knocks three times and says the person's name, but does not yet does this three times.

His knock was first featured in the episode "A Patch, a Modem, and a Zantac", when he knocked once on Meemaw's door after going to ask her for money to buy a computer. Since "An Eagle Feather, a String Bean, and an Eskimo", Sheldon has done two rounds of his knock.

Sheldon has so far performed his knock on Meemaw's front door, his brother Georgie's door and headboard.

This page has been updated to episode 1216. The D & D Vortex

Sheldon's Knock - Featured in these episodes: