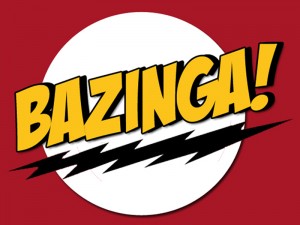 Bazinga is Sheldon's interjection of choice after sarcastic comments and his "classic pranks". Bazinga was first mentioned in the Season 2 finale, The Monopolar Expedition, when Sheldon used the word three times, and was last used by Sheldon in The Stag Convergence.

Bazinga was said by Sheldon in one episode of Season 2, eight in Season 3, two in Season 4, and another two episodes in Season 5. Sheldon has not said Bazinga since the fifth season.

Since then, Penny has mentioned Sheldon's use of the word Bazinga twice. Penny referenced his catchphrase in The First Pitch Insufficiency when she said "Isn't this when he says 'Bazooka' or something?". Penny again mentioned the word in The Opening Night Excitation, where she sarcastically said she was waiting for the "Bazinga" after Sheldon described one of his ideas for Amy's birthday present.

The origins of Bazinga were revealed in a Season 2 episode of Young Sheldon, "A Stunted Childhood and a Can of Fancy Mixed Nuts". Sheldon went to his local comic bookstore to buy practical joke paraphernalia and was directed to a stand displaying products from the Bazinga! Novelty Company. Sheldon returned home to play pranks on his family, he would say "Bazinga!" after each gag.

Bazinga has been registered as a trademark by Warner Bros., the studio behind the show, and is featured on officially licensed Bazinga t-shirts and merchandise.

Bazinga - Featured in these episodes: