The Flag of Apartment 4A 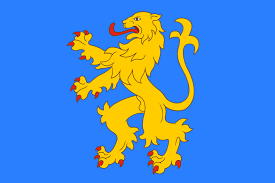 The official flag of Sheldon and Leonard's apartment is a gold lion rampant on a field of azure. The flag was first introduced in The Staircase Implementation in a flashback to Leonard applying to become Sheldon's roommate. According to Sheldon, the flag must only be flown upside down when the apartment is in distress.

A magnet version of the flag is kept on the refrigerator and has been turned upside down in times of distress. A full-sized flag is show opposite the American flag in the background of Sheldon's vodcast "Fun with Flags". When Raj temporarily moved into the apartment in The Roommate Transmogrification, he was given a lapel flag by Sheldon.

In The Property Division Collision, we find out that although Sheldon designed the flag, Leonard was the one who had to order it as Sheldon was "too well-known in the flag community and they'd jack up the price." In that episode, Sheldon and Leonard argued over their shared possessions. The one thing Leonard asked to keep was the apartment flag, even though he doesn't like flags, because it annoyed Sheldon. To get back at Sheldon for changing the Wi-Fi password, Leonard wore the flag as a toga without underwear. When he and Leonard made up, Sheldon let Leonard keep the flag.

The official flag of Apartment 4A is flown behind Sheldon during episodes of Fun with Flags, alongside the American flag.

The Flag of Apartment 4A - Featured in these episodes: