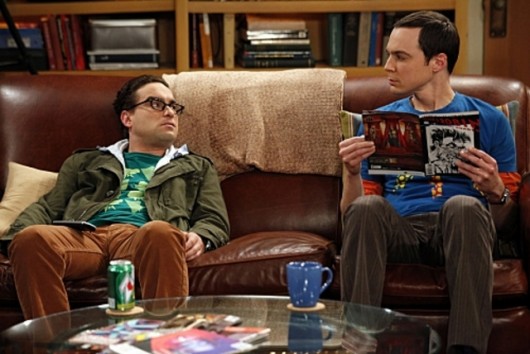 Sheldon's spot is the position on the couch he has claimed as his own, putting it in a "state of eternal dibs". Sheldon has described his spot as the "single point of consistency" in an ever changing world. Sheldon has said that if his life were expressed as a function in a four-dimensional Cartesian coordinate system, his spot, when he first sat on it, would be "0,0,0,0" (  The Cushion Saturation ).

Sheldon has said that his feelings for his spot are even greater than his love for his mother ( The Apology Insufficiency ). Sheldon has said that no matter where he is, it will always be his spot. Sheldon compared his spot to an embassy in a foreign country, explaining that "this seat is the sovereign soil of my bottom" ( The Cohabitation Experimentation ).

In the Young Sheldon episode "A Therapist, a Comic Book, and a Breakfast Sausage", Sheldon told his friend Tam that he was sitting in his spot in the high school cafeteria. Asked why it was his spot, Sheldon simply said "It's complicated. Just move."

In the Pilot episode, Sheldon explained to Penny that he chose his spot as "in the winter that seat is close enough to the radiator to remain warm, and yet not so close as to cause perspiration. In the summer it's directly in the path of a cross breeze created by open windows there, and there. It faces the television at an angle that is neither direct, thus discouraging conversation, nor so far wide to create a parallax distortion."

In The Staircase Implementation, Sheldon explained that it "faces the television at a direct angle allowing me to immerse myself in entertainment or game play without being subject to conversation". Sheldon explained he had placed the chair in a state of eternal dibs and, when pressed on it, said "Cathedra mea, regulae meae. That's Latin for 'my chair, my rules'."

In The Apology Insufficiency, Sheldon offered Howard his spot on the couch as an apology for costing him a government job. In the end, however, Sheldon only let Howard sit in his spot for 94 seconds before demanding it back.

In The Parking Spot Escalation, Sheldon and Howard had a bitter fight after the university reassigned Sheldon's parking spot to Howard. During a series of tit-for-tat reprisals, Howard performed a "nude revenge wiggle" on Sheldon's couch cushion.

When Sheldon feared he was losing his mind in The Earworm Reverberation, he recorded a video for "Crazy Future Sheldon" explaining the most important points of his life, including the ideal thermostat setting and his spot on the couch. The only other person Sheldon was willingly let sit in his spot is his Meemaw ( The Meemaw Materialization ).

Sheldon's protectiveness over his spot doesn't just extend to people sitting there. In The Application Deterioration, Sheldon tells Amy to scoot over as part of her shadow was on his spot. In The Fermentation Bifurcation, after an enjoyable evening of Dungeons and Dragons with a pregnant Bernadette, Sheldon invites Bernadette over to the apartment whenever she wants a break from being "Bernadette the Pregnant". Sheldon stipulates that the offer is only good until the third trimester as he can't risk getting amniotic fluid on his spot.

Sheldon's Spot - Featured in these episodes: