When Sheldon and Amy start bickering over their living situation, Leonard and Penny step in to keep the pair separate and to give them advice on living with a significant other. Sheldon threatens to see other women if Amy won't fall in line with his demands, including for her to follow a bathroom schedule.

Meanwhile, after Howard and Bernadette blow off a planned vacation, they observe a pair of unexpected guests in their hot tub.

1004 - The Cohabitation Experimentation
Next Episode 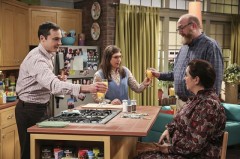 Sheldon explains to Penny that the reasoning behind his unique knock is that, as a child, he walked in on his Dad having relations with another woman. Sheldon explained, "it's also why I never open a door without knocking three times. I mean, the first one's traditional, but two and three are for people to get their pants on."

While telling Leonard about the problems in her relationship with Sheldon over his controlling nature, Amy sits in Sheldon's Spot. When Leonard asks Amy how it feels, she says "it's a nice enough spot." She's about to say how being able to sit in Sheldon's spot is one of the things she might now stand up to Sheldon about, but when Sheldon and Penny return home Amy immediately jumps out of the spot. After Sheldon sits down in his spot he wonders why it's warm.

Sheldon: My mother was at bible study. I walked in the house expecting to find it empty, and I heard a sound coming from my parents' bedroom. When I opened the door, I saw my father having relations with another woman.
Penny: Oh, that's awful!
Sheldon: I know. It's also why I never open a door without knocking three times. I mean, the first one's traditional, but two and three are for people to get their pants on.

Sheldon: Being with Amy has awoken the sexual creature within. When I see a pretty gal walking down the street, I think, "hubba hubba" like any other guy.
Penny: You kiss your mother with that mouth? 'Cause it's fine.

Amy: I'm in this relationship, too. I need to stand up for myself.
Leonard: Of course you do.
Amy: And if he doesn't like it, he can move back here.
Leonard: Oh, he can try. He'd just need a good locksmith.

Penny: Well, let's just get them apart for a while so they can cool down.
Leonard: Good. Then before we reintroduce them, we'll give him one of her sweaters so he can get used to her scent again.
Penny: So it's okay for you to joke around?
Leonard: No, that's actually what we did with him when Howard came back from space.

Bernadette: Uh, I left my phone downstairs!
Howard: Damn, so did I.
Bernadette: Wait, I have my iPad.
Howard: What are you going to do, e-mail 911?

As Leonard and Penny watch TV in the apartment, Amy and Sheldon come in arguing about their relationship. Amy tells Sheldon he can’t regulate every aspect of their lives, but Sheldon wants her to “roll over” and accept her fate. Amy says she’s willing to make some concessions to Sheldon’s need to have things a certain way, but she wants him to be willing to compromise.

Raj and Howard chat with Stuart at the checkout of the comic book store. After Raj asks when Howard is going to leave with Bernadette for a trip to Palm Springs, Howard says they’re hoping to set off as soon as it gets dark. He and Bernadette are trying to spend more time together before the baby comes.

Back in the apartment, Leonard says there’s always going to be conflict when you live with someone but you’ve got to keep communicating. Sheldon and Amy try talk but are soon bickering about keeping their toothbrushes in the same holder. Sheldon says the idea makes him want to see other people. Leonard and Penny are worried the fighting will lead to Sheldon moving back in with them, so they decide to try and keep them apart to let them cool down.

In their bedroom, Howard asks Bernadette how she’s feeling, but his question is answered as he hears her throwing up in the en suite bathroom. Bernadette doesn’t seem up for a three-hour drive to the desert, so Howard suggests they stay home and have a “secret vacation” at home.

Later that evening, Penny is driving Sheldon around as he complains about Amy. Penny has similar complaints about living with Leonard. Elsewhere, Howard is giving Bernadette a foot rub. When they hear a noise that sounds like the front door, they’re worried that somebody is in the house. After locking the bedroom door, they hear sounds from the hot tub. When they look out the window, they Stuart, who heard Howard talk about their vacation plans at the comic book store.

Back in the apartment, Leonard is talking to Amy in the apartment. Leonard says Sheldon used to bother him too as he’s “the worst”, but Amy says that’s not making her feel better. Leonard says when he started living with Penny there was a learning curve. Meanwhile, Howard and Bernadette watch Stuart in the hot tub. When the porch lights come on, they wonder if someone else is here, while Stuart ducks under the water. Raj comes out of the house in swim shorts and with a bottle of wine. When he gets into the tub, Stuart pops up and scares the hell out of Raj.

Raj and Stuart wonder what each other is doing there. Elsewhere, Penny is still driving Sheldon around, complaining about their partners. Sheldon suggests they go for ice cream instead of driving aimlessly around. Sheldon claims it’ll be a good place to meet other women, but Penny doesn’t believe he’s really interested in that.

Back in the hot tub, Stuart and Raj share a drink and a toast - to Howard and Bernadette and the house key they never asked Stuart to return. When Raj and Stuart talk about his new apartment, Stuart explains his electricity is out because he can’t pay his bills. Raj offers him a place to stay and reveals he’s now single again, but was too embarrassed to tell his friends.

In the apartment, Amy wonders whether she should just give in to Sheldon and his bathroom schedule. After Leonard points out how many changes she’s got Sheldon to make, Amy decides to stand up for herself. Meanwhile, Sheldon and Penny sit down at an ice cream parlor. After Penny wonders who Sheldon is going to hit on, he admits he doesn’t really want to hit on anybody. Sheldon tells Penny a story that he’s never told anyone, about walking in on his dad with another woman. Sheldon worries that by living with Amy and bickering like his parents, he’ll do something similar and hurt Amy. Penny tells Sheldon not to worry about what he might do in the future, but to fix what he’s doing wrong right now.

Raj thinks it’s getting late so they should both head home. Stuart asks for a minute to get out, since he’s not been wearing a swimsuit. Having finally had enough, Howard yells at them from the window. Back in the apartment, Amy is sitting in Sheldon’s spot and considers standing up to Sheldon about the rules around his spot. As soon Sheldon and Penny get back, Amy jumps out of the spot. Sheldon apologizes to Amy and says he’ll forgo the bathroom schedule for Amy. Sheldon says he was never interested in seeing other women and to prove how serious about them he is, he says they should take their relationship to the next level: sharing a toothbrush holder.