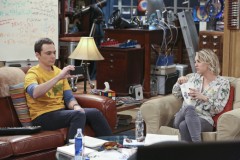 Sheldon has a revelation when he realizes why a song was stuck in his head. Also, Amy invites Dave over for dinner despite their previous awkward date, and Howard and Raj become obsessed with a fan of their band, "Footprints on the Moon".

909 - The Platonic Permutation
Next Episode

When Sheldon films a video for "Crazy Future Sheldon" complete with information about his life, Sheldon points out his spot and explains "You're very protective of it. When anyone else tries to sit here, you berate them relentlessly. It sounds mean, but somehow you make it adorable."

Sheldon performs his knock on Amy's apartment door when he rushes over there to try win her back. Despite his date with Amy being interrupted by her ex-boyfriend, Dave is more excited to finally meet the great Sheldon Cooper.

Dave: You're kidding. How's my hair?"

> Footprints on the Moon

After starting a Facebook page for "Footprints on the Moon", Raj and Howard track down a cool fan who liked their page, only to be disappointed by his uncouth behavior.

Sheldon: This song is never going to stop. Have you ever dealt with something so relentlessly irritating?
Leonard: That's a trick question, right?

Sheldon: I remember the song! It's called "Darlin'" by the Beach Boys! Oh, thank goodness! I'm not crazy! I don't have to take a pigeon as my bride!
Leonard: There goes our shot at him living on the roof.

Penny: So you have a song stuck in your head. It happens to everybody.
Sheldon: Well, I'm not everybody. I have an eidetic memory. I should be able to remember what song this is, but I can't. Something's wrong with me.
Penny: I told you if we were patient, he'd figure it out for himself.

Penny: Well, she did soften your life, didn't she?
Sheldon: Yes! She's like the dryer sheets of my heart!

Sheldon: This is Leonard. He's your best friend in the world.
Leonard: All right, just stop. This is ridiculous.
Sheldon: Sometimes he gets cranky, but you can trust him with your life. And he does more things for you than I can even begin to list.
Leonard: Thank you.

In his bedroom, Sheldon films a video to document his descent into madness. It’s 2:25 am and he feels the urge to urinate, even though it’s hours away from being his usual urination time. He fears it’s only a matter of time before his tenuous grasp on reality fades.

Two days earlier, Sheldon is humming a song as he and Leonard stare at their whiteboards in the apartment. After Leonard points out his humming, Sheldon tries to figure out what the song is. Leonard tells him it’s an earworm and the song will come to him in time, but Sheldon can’t let it go. Leonard realizes this is going to occupy the rest of their night.

In the apartment, Sheldon phones the Rock and Roll Hall of Fame to ask if they can help identify the song. Penny doesn’t see the big deal about having a song stuck in your head as it happens to everybody. Sheldon insists he’s not everybody. He has an eidetic memory and should be able to remember the song.  Sheldon thinks something’s wrong with him and worries this may be the first step of his descent into madness.

Amy paces around her apartment as she plucks up the courage to call Dave, with whom she went on a couple of dates. Dave is pleasantly surprised she called, considering how he acted on their last date. When Amy asks if he would like to get dinner some time, Dave readily agrees.

In Howard’s lab, Raj tells Howard he set up a fan page on Facebook for their band. Howard is upset that Raj didn’t talk to him about this first and threatens to go solo. When Raj tells Howard someone joined their page, his anger fades and they’re both delighted to have a fan.

In the apartment, Sheldon is annoying Leonard and Penny by repeatedly playing the tune stuck in his head on a keyboard. As Sheldon struggles to recall the song, Penny tells him to take a break and do something else for a while. After Sheldon admits there was a project he was thinking about starting, he gets his phone out to record a message to “Crazy Future Sheldon”, who was driven mad by an earworm.

In Amy’s apartment, Bernadette is surprised that she’s agreed to go out with Dave again. Bernadette can’t get over the fact he spent the entirety of their last date talking about Sheldon, but Amy says Dave is just a fan of Sheldon’s work and he has promised not to bring it up again. When Bernadette asks where Dave is taking her, Amy says he’s coming to her apartment and she’s making dinner. Bernadette thinks it’s a big step inviting a guy into her home, but Amy argues that might be what she needs after Sheldon shot her down.

In Howard’s lab, Raj thinks they should send a message to their fan. After they write a supportive message back, Howard wants to know more about their fan. As Raj describes Trent, they’re both amazed at how cool he is.

Leonard and Penny struggle to sleep in his bedroom as they listen to Sheldon playing the same notes over and over again on his keyboard. Penny wants Leonard to go talk to him, but Leonard argues he takes care of him all day. After Penny goes to Sheldon’s room and takes his keyboard away, Sheldon starts playing a tuba instead.

Sheldon records another message to his future crazy self, outlining his views on the ideal thermostat setting and explaining his spot. After Leonard asks Sheldon to get back to work, Sheldon tells his future self that Leonard is his best friend in the world, who he can trust with his life.

As Raj joins Howard in his living room to play video games, Howard is spying on their Facebook fan. Bernadette doesn’t understand how they have a fan when their band played just once at the comic book store. When Raj notices that their fan just checked in at a local coffee house, Howard suggests going down to check him out.

In Amy’s apartment, Dave tells her the food is delicious and it’s been a long time since he’s had a homemade meal. When Dave asks about her apartment, Amy tells Dave she is considering moving apartment now she doesn’t need to be so close to Sheldon. Amy quickly regrets bringing up her former boyfriend and struggles to change the subject.

As Sheldon eats dinner, he is still humming the tune, much to Leonard and Penny’s annoyance. Sheldon worries the song is never going to stop. Sheldon says he shouldn’t be surprised as there’s a long history of brilliant minds descending into madness. As Sheldon lists some of the notable people who experienced psychological issues, he mentions Brian Wilson of the Beach Boys. Sheldon instantly recognises the song as Darlin’ by the Beach Boys.

As Raj and Howard sit down at the coffee shop, they notice their fan, Trent, sitting at a table. They decide not to go over and introduce themselves, hoping he will spot them. They are disturbed when they notice him picking his nose, before proceeding to look at the result and eat it.As they try to sneak out of the coffee shop, Trent notices them and asks if they’re from the band. Howard and Raj say no.

As Sheldon plays the song Darlin’ to Leonard and Penny, he wonders why this particular song was stuck in his head as he doesn’t even like the Beach Boys. After Leonard suggests he get back to work, Sheldon realizes the song is about his love for Amy. Sheldon reads the lyrics to Penny, explaining it’s about how Amy made his life better. Sheldon declares he has to go and rushes out of the apartment.

As Dave and Amy sit anxiously on her couch, she compliments his tie clip. As she admires the clip, Dave leans in for a kiss. Amy is surprised but insists it’s okay. Amy admits she’s a little nervous. As Amy leans in for a kiss, Sheldon knocks at the door. Dave is more excited than put out by the inconvenience.

When Amy opens the door, she tells Sheldon it’s not a good time. Sheldon says he doesn’t care. He explains he had a song stuck in his head and realized it was about her. Like the song he couldn’t get out of his head, he can’t get her out of his heart. As Amy tries to work out what he is talking about, Dave jumps into explain what Sheldon was trying to say.

Sheldon apologizes for not realizing she was on a date, but Amy says it’s okay and asks him to go on. Sheldon says if Amy wants to be his girlfriend again, he really wants to be her boyfriend. After Sheldon and Amy say they love each other, Dave encourages Sheldon to kiss Amy. After they embrace each other and passionately kiss, Sheldon tells Amy he’ll let her get back to her date. Amy pulls him back in for another kiss.

As Dave watches on as Sheldon and Amy continue to kiss, he breaks the silence by telling her he will see himself out. Dave thanks Amy for dinner and tells Sheldon it was a pleasure to meet him. Amy kicks the door shut as Dave stops to ask if Sheldon would like to “shoot the breeze” about physics one day. As Dave walks away, he declares “What a lovely evening.”