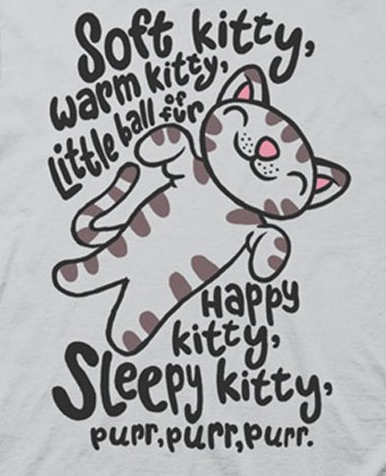 The song was first introduced in the Season 1 episode The Pancake Batter Anomaly, where a sick Sheldon asks Penny to sing the song to him. Most recently, Sheldon sang the song to Amy when he tried to comfort her in The Inspiration Deprivation.

Soft Kitty has been featured in an episode of Young Sheldon. In "A Sneeze, Detention, and Sissy Spacek", Sheldon's extreme measures to avoid getting the flu leave him cut off from society, until his Meemaw encourages him to return to civilization. When Sheldon then comes down with the flu, his mother Mary is there to care for him and sing Soft Kitty to make him feel better.

This page has been updated to episode 1219. The Inspiration Deprivation

Soft Kitty - Featured in these episodes: