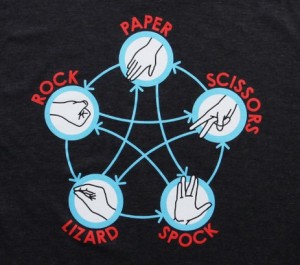 Sam Kass explains he created the expanded game because it seemed like most games of Rock Paper Scissors with people you know would end in a tie.

Rock Paper Scissors Lizard Spock was first mentioned in the Season 2 episode, The Lizard-Spock Expansion, the title of which references the game. It was last mentioned in The Rothman Disintegration.