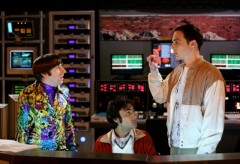 A smitten Wolowitz attempts to impress the new love of his life, Dr. Stephanie Barnett, but instead crashes the Mars Rover into a ditch. When the guys arrive to help Howard out of his predicament, Stephanie finds herself more interested in Leonard and promptly leaves with him. 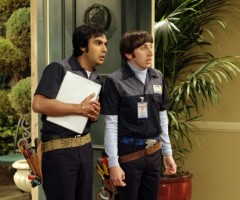 207 - The Panty Pinata Polarization
Next Episode

When Sheldon and Raj can't agree about what to watch on TV, with Sheldon favoring Saturn 3 and Raj wanting to watch Deep Space Nine, Raj suggests they settle it with a game of Rock Paper Scissors. Sheldon thinks they should play Rock Paper Scissors Lizard Spock instead, as there is a lower chance that the game will end in a tie.

This title of this episode, The Lizard-Spock Expansion, references the game and its mention by Sheldon.

Stephanie: So, how was your day?
Leonard: You know, I'm a physicist, I thought about stuff.
Stephanie: That's it?
Leonard: I wrote some of it down.

Sheldon: I'm sorry but I'm not going to watch the Clone Wars TV Series until I've seen the Clone Wars movie. I prefer to let George Lucas disappoint me in the order he intended.

When Sheldon, Leonard and Raj can't agree on what to watch on TV, they engage in a game of Rock Paper Scissors Lizard Spock to decide. Howard enters wearing an eye patch - his latest pick-up strategy. Later that night, Howard calls to tell them he's got a problem at the Mars rover lab. When the guys visit the lab, Howard explains he crashed the Mars rover while trying to impress a woman, Dr. Stephanie Barnett, he picked up at a bar.

After Howard asks Leonard to drive Stephanie home, Leonard and Stephanie kiss passionately in the car. Leonard feels guilty about it but is assured by Stephanie that he had no chance with her. Back at the lab, the guys fail to get the Mars Rover out of the ditch and instead turn to Plan B: delete all security files and run away.

After a news broadcast about the Mars rover situation, Penny asks Howard whether he worked on that project, but he strongly denies it. Leonard asks to talk to Sheldon in private. Leonard tells Sheldon he's going out and he would like the others not to know where he's going. Leonard goes to Dr. Stephanie's apartment where they begin making out. At the same time, Howard leaves a number of messages on her voice mail.

When Penny notices Leonard has new clothing, she asks who he's seeing. Leonard explains his situation and Penny assures him he's not a bad person for seeing Stephanie. Leonard goes to Howard's to tell him that he's seeing Stephanie, but he's unable to tell him before she calls and lets Howard know. Back at the apartment, Howard won't talk to Leonard or Stephanie, until she offers to set him up with her roommate for a group date.

Another news report on the Mars rover reveals the device may have found the first data suggesting there's life on mars, but they will never know who was responsible for the discovery.