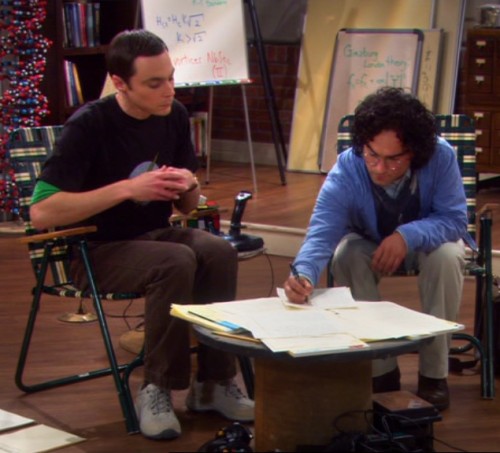 The Roommate Agreement is a document drafted by Sheldon Cooper to which he and Leonard Hofstadter are signatories. The agreement governs their rights and responsibilities as friends and, formerly, roommates in Apartment 4A.

While Leonard was dating Priya, in The Agreement Dissection, she used her legal knowledge to pick apart the agreement, causing Sheldon to rewrite it and blackmail Leonard into signing a new version which benefits Sheldon greatly.

Reeling from his break-up with Amy and upset that Leonard wanted to move in with Penny, Sheldon terminated the Roommate Agreement with Leonard in The 2003 Approximation. After Leonard initialed to acknowledge he'd returned his key, Sheldon then gave him a key as his future neighbor (requiring another initial). When Leonard agreed to still sleep in the apartment some of the time, Sheldon decided to write up a new roommate agreement.

When Sheldon needed a place to work without disturbing Amy in The Separation Triangulation, Sheldon proposed renting his old room back from Leonard and drew up a rental agreement. Leonard was initially dismayed by how Sheldon, who was so difficult to live with for years, was the ideal tenant.

When Leonard tried to use a time-limited trial clause in that rental agreement to kick Sheldon out of his old room, Sheldon had included a timezone trap that meant Leonard was three hours too late. Sheldon then claimed a much longer rental agreement was in force. On page nine of that agreement, it called for Leonard to provide Sheldon with "lemon-flavored sparkling waters".

In a Season 1 episode of Young Sheldon, "Vanilla Ice Cream, Gentlemen Callers, and a Dinette Set", Sheldon's Meemaw set out ground rules for Sheldon after he had involved himself in her romantic relationships. As she laid out her terms, Sheldon had an epiphany and realized he could "could draw up a contract for any social relationship", describing it as "a helpful way to remove ambiguity in a world that was often hard to understand." Adult Sheldon's voiceover explained that he "would go on to draw up such contracts throughout [his] life, with roommates, with my wife. Even with my own children."

Roommate Agreement - Featured in these episodes: