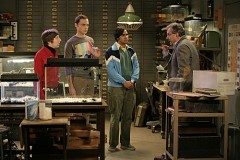 Leonard and Penny's relationship hits a snag when their first night together is not as special as they expected. Meanwhile, Sheldon and Howard go to great lengths to determine the species of a cricket for a wager they made.

301 - The Electric Can Opener Fluctuation
Next Episode

> I'm Not Crazy. My Mother Had Me Tested

During an argument between Sheldon and Howard over whether Wolverine was born with bone claws, Raj tells Howard to give it up as he's "arguing with a crazy person". Sheldon responds "I'm not crazy. My mother had me tested."

Raj: I don't like bugs, okay. They freak me out.
Sheldon: Interesting. You're afraid of insects and women. Ladybugs must render you catatonic.

Sheldon: I am not crazy, my mother had me tested.

Raj: Ooo, big talk from a man who was once treed by a chicken.

Wolowitz: I think that you and Penny had a poor night.
Leonard: It wasn't poor. It was ... just fine.
Raj: Dude, the fourth Harry Potter movie was just fine.

Sheldon: Howard, you know me to be a very smart man. Don't you think that if I were wrong, I'd know it?

When Leonard joins the guys at the comic book store, they start questioning him about his first night with Penny. Howard and Raj get Leonard to reveal that the sex between them was "just fine". Back at the apartment, the guys have Indian food for dinner and Sheldon is disappointed to learn it's not from their usual restaurant. When Sheldon crosses the line and mentions Leonard's characterization of his & Penny's night together as "just fine", a deeply embarrassed Penny leaves the apartment.

Leonard goes over to Penny's to try patch things up. When they start discussing how their first night was, Penny says it was "okay". They decide to have some wine to loosen up and get over their awkwardness together. Back in the apartment, Sheldon and Howard make a wager about the species of cricket that's chirping in the apartment. The guys then go in search of the cricket to prove Howard or Sheldon right. Meanwhile, Penny and Leonard get a bit too free with alcohol. In a desperate attempt to settle the bet, Sheldon climbs into the elevator shaft to find the cricket. Over at Penny's, the pair are now throwing up together after drinking too much.

The next day, Raj and Sheldon argue over what to name the cricket they found. Howard and Raj prefer Toby, but Sheldon thinks that's a ridiculous name for a cricket. Howard brings an insect guide to determine the species, but he and Sheldon continue to argue. With their cricket debate still waging, the guys pay little attention to Leonard who wants to discuss his drunken night with Penny. The guys go to the university's entomologist, Professor Crawley, to get him to identify the cricket. After Crawley determines it's a field cricket, Sheldon concedes defeat to Howard.

As Sheldon gathers his collateral for the bet to hand over to Howard, Penny asks him about her relationship with Leonard. Sheldon says they shouldn't worry so much about their relationship as they can always return to being friends. After hearing that Sheldon had spoken to Penny, Leonard goes to her apartment to see what Sheldon said. They decide to follow Sheldon's advice to return to being friends, but a friendly hug leads them to kissing again.

Character Clothing from the Episode