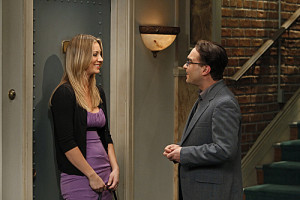 The key moments in Leonard and Penny's relationship including the first time they saw each other across the hall, their first kiss, their first date, breaking up and getting back together, the first time Penny says "I love you", a couple of proposals, their engagement, two wedding ceremonies, and finally Penny getting pregnant.