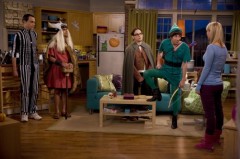 The whole gang attends Penny's Halloween party, where Leonard's feelings for Penny come to the fore after her ex-boyfriend Kurt shows up. Leonard's attempts to impress Penny by standing up to Kurt lead to humiliation.

105 - The Hamburger Postulate
Next Episode 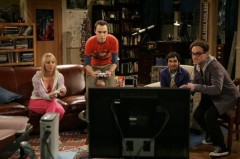 When Leonard is upset after being embarrassed at Penny's Halloween party by her hulking ex-boyfriend Kurt, Sheldon brings Leonard a hot beverage.

"Leonard: What's that?
Sheldon: Tea. When people are upset the cultural convention is to bring them hot beverages. "

Sheldon: Given the reaction to my costume, this party is a scathing indictment of the American educational system.
Kurt: You're a zebra, right?
Sheldon: (to Leonard) Yet another child left behind.

Leonard: We all have other costumes, we can change.
Raj: Or we could walk right behind each other all night. It'll look like one person going really fast.

Sheldon: I don't care if anybody gets it. I'm going as the Doppler effect. If I have to, I can demonstrate. NYEEEOOOOM

When the guys return home following a dismal performance at paintball, Penny invites them to her Halloween party. The gang is excited to go to a costume party, though they're disappointed when they all dress up as the Flash. The guys agree to change their costumes and Leonard chooses Frodo, who was everybody's second choice.

The gang arrives at Penny's apartment promptly on time, unaware that people don't usually turn up right on time. When the party gets going, the guys are just sitting on Penny's couch. Howard tries to hit on one of Penny's friends, while Leonard is afraid to talk to anybody. Sheldon acts as Leonard's wingman when he approaches one of Penny's friends.

Later that evening, Penny's ex-boyfriend Kurt turns up at the party. In a bid to impress Penny, Leonard tries to show up Kurt. When Kurt realizes that Leonard's calling him less evolved, he forcibly picks Leonard up and intimidates him. Leonard and Sheldon quickly leave the party.

Feeling bad about what happened to Leonard, Penny comes by his apartment to apologize for Kurt's behavior. When Penny is upset and emotional about letting Kurt back in her life, she kisses Leonard. When he realizes she is drunk and doesn't want to take advantage of her, Leonard stops Penny's advances. Penny wonders why all guys couldn't be like Leonard and kisses him again, in full view of Kurt, as she leaves Leonard's apartment.