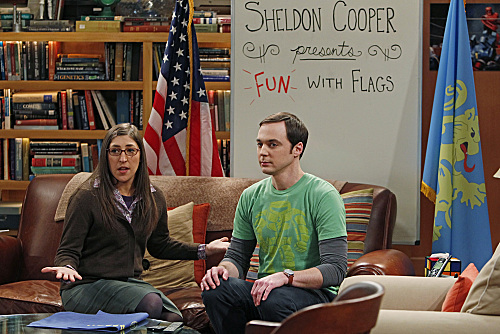 Guests on Fun with Flags have included Amy, who co-hosts the vodcast with Sheldon and has also directed the show; Penny, Wil Wheaton, LeVar Burton and Barry Kripke.

The first episode of Fun with Flags was shown in The Beta Test Initiation and featured the state flag of Oregon. The second vodcast, shown later in that episode, featured the flag of Bavaria with Amy dressed up as a giant pretzel.

Wil Wheaton guest starred in a Star Trek-themed episode of Fun with Flags in The Habitation Configuration, but he walked out after director Amy insulted him. LeVar Burton was later drafted in as a replacement. Sheldon welcomed Penny to a Fun with Flags for novices in The Monster Isolation.

Sheldon called time on his vodcast in The Champagne Reflection, declaring Episode 232 the last episode. After one person left a comment on the video, Sheldon decided to revive the Fun with Flags series.

Following his break-up with Amy, Sheldon recorded a special episode of Fun with Flags about countries which split up in The Separation Oscillation. Sheldon talked about the Czech Republic and Slovakia, and Romania and Moldova in the episode, which featured very thinly veiled comments about his split from Amy. After Sheldon sent Amy a link to watch the episode, she demanded he take it down.

To celebrate Valentine's Day as a couple again, Sheldon and Amy hosted a special live episode of Fun with Flags in The Valentino Submergence. Much to Sheldon's chagrin, their vexillological discussion was taken off topic topic when a distraught Raj called in for relationship advice. Barry Kripke's unwanted calls aiming to find a female companion only added to Sheldon's woes.

After moving across the hall to Apartment 4B, Sheldon and Amy hosted their first "on location" episode of Fun with Flags in The Veracity Elasticity. Howard and Raj's band, Footprints on the Moon, were the "house band" and provided the Fun with Flags theme tune. The subject of the episode was regions that had come together, and featured the flags of St. Kitts and Nevis, and the city of Budapest (formed in 1873 by the combination of the Hungarian cities of Buda and Pest).

Sheldon and Amy hosted another episode from Apartment 4B in The Separation Agitation, a live behind-the-scenes special titled Fun with Flags: Behind the Flags - A Retrospective. Howard and Raj's Footprints on the Moon were the house band once again. In the episode, Sheldon interviewed about their (limited) recollections of the birth of Fun with Flags.

Fun with Flags - Featured in these episodes: