Sheldon and Amy host a live Valentine's Day episode of Fun with Flags, Leonard and Penny grapple with getting older, Howard and Bernadette find a surprise in their hot tub and Raj is torn between Emily and the cute girl he met at the Comic Bookstore. 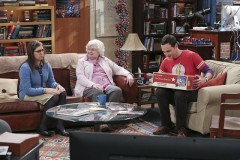 914 - The Meemaw Materialization
Next Episode

For Valentine's Day, Sheldon and Amy host a special live episode of Fun with Flags, but their vexillological show goes off track when a distraught Raj calls in for relationship advice.

Amy: Hi. You're on Fun with Flags.
Barry Kripke: Hello. I want to talk about how lonely I am, too.
Raj: Kripke? Is that you?
Barry Kripke: Yeah, I'm just sitting here all by myself wondering if I'll ever find someone to share my life with. Preferably Asian, 18-24, no fatties.

Sheldon: Oh, and speaking of Valentine's Day, I haven't forgotten about you tonight.
Amy: What do you mean?
Sheldon: Well, you've become such an integral part of my life as well as this show, I felt it only right to include your name in the title.
Amy: Oh, that is so sweet.
Sheldon: So from now on, this program will be officially known as Dr. Sheldon Cooper and Dr. Amy Farrah Fowler present Dr. Sheldon Cooper's Fun With Flags.
Amy: Catchy.

Amy: Since we're live, you'll finally be able to reach out to us with your flag thoughts and flag questions.
Sheldon: Allow us to answer a few quick ones that we get all the time. Uh, yes, I really am a doctor. Uh, yes, she really is my girlfriend.
Amy: No, I just blink a lot, it's not Morse code for "rescue me."

Raj: But, Amy, when you and Sheldon split up, didn't you start dating someone right away? Amy: Well, I ... I wouldn't say right away.
Sheldon: And actually, it was three different men.
Barry Kripke: Three different men?! Damn, girl, way to give the milk away!

When Sheldon sits down at the guys’ table in the university cafeteria, he tells them that he and Amy will be spending Valentine’s Day streaming their first ever live episode of Fun with Flags. After Sheldon invites them to join him, Leonard explains he and Penny have dinner reservations that night, while Howard and Bernadette are breaking in their new hot tub. Raj says he will be spending Valentine’s Day with Emily, but he doesn’t sound very happy about it. Ever since he met Claire, he’s been wondering whether he and Emily are right for eachother. Howard and Leonard tell him he should just break up with her if he is no longer sure, but Raj says it’s easy for them to say that as they have never broken up with anyone.

When Raj joins Penny and Leonard in their apartment, he asks her for advice on how to break up with Emily. Penny advises him to do it at her place, tell the truth, make it quick and be prepared for tears. Later, Emily is stunned that Raj would break up with her so close to Valentine’s Day. Not long later, Raj calls Claire to see if she is free for Valentine’s Day as he has just broken up with his girlfriend. Claire, who just got back together with her boyfriend, thinks Raj is an ass for breaking up with someone right before Valentine’s Day. Later still, Raj pleads with Emily to take him back, but she slams the door in his face. Finally, Raj cries to Penny that he’s going to be alone on Valentine’s Day.

As Sheldon and Amy prepare the apartment for their live stream of Fun with Flags, Sheldon is nervous that people might not be around to watch. Sheldon tells Amy he hasn’t forgotten about her on Valentine’s Day. Sheldon reveals that he has added her name to the podcast’s title as she’s become an integral part of his life. It’s now called “Dr. Sheldon Cooper and Dr. Amy Farrah Fowler present Dr. Sheldon Cooper’s Fun with Flags”.

At a fancy restaurant, Leonard tells Penny that the maitre’d said it will be an hour until they’re seated. Penny thinks that’s crazy as they have a reservation, so she suggests Leonard try bribing the maitre’d. When Leonard goes over and asks again whether it will still be an hour, he pretends to find a twenty on the floor and tells the maitre’d he must have dropped it. Unfortunately, the maitre’d asks if anyone dropped the money and a tall guy claims it as his. Leonard returns to Penny and insists he took care of it.

Back in the apartment, Amy and Sheldon’s live stream begins. Amy invites the audience to contact them with their flag questions and comments during the show. When they receive their first call, it turns out to be Raj who wants to know why he is so self-destructive. Sheldon tries to cut Raj off as it’s not a flag-related question, but Amy stops him.

After Bernadette manages to catch the rat in a strainer, she says it isn’t moving but she thinks it’s still alive. Bernadette tells Howard it’s actually a rabbit and they need to save it. When she asks Howard to look up how to help an injured rabbit, Howard says they need to make it comfortable and warm, which shouldn’t be a problem as it was just in the hot tub.

Back at the restaurant, Penny is fed up of waiting and decides to talk to the maitre’d herself. When Penny tries to flirt with him, he tells her there’s nothing he can do and refers to her as “ma’am”. Penny is horrified and insists they’re a similar age, prompting the twenty-one-year-old maitre’d to scoff. When Penny returns to Leonard, she tells him they’re leaving because she is young.

A glum Sheldon sits quietly as Amy tells Raj it’s perfectly normal to have doubts after breaking up with someone. Sheldon tells him it’s not normal to be blubbering about emotions during a flag show, however. Amy is surprised when they get another call. It’s Barry Kripke, who wants to talk about how lonely he is. When Barry turns the call into a personals ad, Sheldon insists all comments should be flag-related.

As Howard feeds the rabbit with a pipette, Bernadette thinks it’s a good sign that the rabbit is eating. Bernadette and Howard agree the rabbit is pretty cute. After Howard wonders whether they should name him, Bernadette suggests the name Valentino. As Howard strokes the rabbit’s face, it bites his finger. Howard freaks out as wild rabbits can carry rabies.

As they eat fast food in their car, Leonard tells Penny it’s not the night they had planned but it’s not so bad. Penny thinks the junk food is amazing. He’s glad she’s feeling better. Penny concedes she was just hungry and cranky as she’s never been called ma’am before. Penny mentions she was twenty-two when she met him and she wonders where the time has gone. Leonard suggests they do something fun tonight, so when they are actually old they will look back on this night and remember the good time they had.

Sheldon is at the end of his tether as Amy tries to cheer up with Raj and Kripke. Amy knows they feel bad about being alone, but she says they should take some time for themselves. Raj points out that after Amy broke up with Sheldon, she started dating right away. Raj says before Emily he was alone for so long, he’s not sure if he can do that again. After Amy wonders if anyone in their audience would be interested in meeting Raj, she is pleased when a caller rings up. Unfortunately it’s just Kripke again.

As Leonard and Penny drive around the city, he tries to think of things they could do that are young and fun. Leonard suggests going dancing, but Penny argues nobody wants to see that. Penny proposes skinny dipping, but Leonard worries about fish nibbling his business. When Penny tells him about a screening of Moulin Rouge which starts at midnight, Leonard is unsure about doing something so late. Leonard reluctantly agrees, but they are both relieved when Penny learns that tickets are sold out.

Back on Howard and Bernadette’s deck, he says that rabies is highly unlikely in rabbits but he is still worried. Bernadette offers to take the rabbit to the vet to have him tested, but Howard learns that the only way to test a rabbit for rabies is to cut off its head and check its brain. Howard admits that the rabbit doesn’t have any symptoms, but he decides to go to the emergency room just to be safe. After Howard goes back inside, Bernadette tells the rabbit she’ll find another day to tell him she’s pregnant.

Amy is as glum as Sheldon as the discussion of Raj’s personal life continues to dominate their live show. Sheldon has had enough and wipes his name off the title. After Raj apologizes for bothering Sheldon,Amy chides him for not being very sympathetic to his friend. Sheldon tries to be helpful and tells Raj he knows breakups can be painful, but he points out pain has an evolutionary purpose by providing information from the environment that our behavior isn’t good for us. Sheldon tells Raj he’s sorry that he’s suffering, he also suffered when he and Amy broke up. Surprisingly, Sheldon says he is thankful that he went through it as their relationship is now stronger than ever. Amy tells Sheldon she feels the same way, but their heartfelt discussion is interrupted as Leonard and Penny, dressed in skimpy Valentine’s Day-themed outfits, barge in and make a big display with confetti and air horns.

As Sheldon and Amy celebrate the success of their live show, Penny and Leonard are busy cleaning up the confetti from the apartment floor.