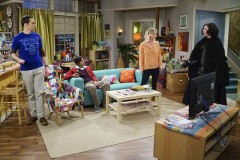 Everyone must choose sides when a small argument between Leonard and Sheldon erupts into a heated fight during a group get-together. 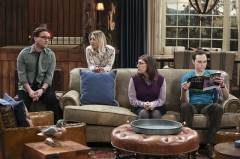 920 - The Big Bear Precipitation
Next Episode 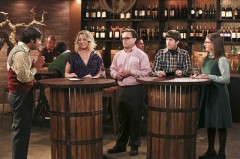 Sheldon and Leonard fall out with each other when Leonard refuses to attend the quarterly roommate agreement meeting. Leonard doesn't see the need to have a meeting every three months, but Sheldon thinks that's the sort of thing that should be brought up at a quarterly meeting. According to Sheldon, Penny was set to lead the Pledge of Allegiance at the next meeting for the first time.

Sheldon knocks on Leonard's bedroom door in the middle of the night to ask him an inane question about Batman that he'd not been able to ask earlier.

Sheldon says that Leonard's refusal to attend the mandatory quarterly roommate agreement meeting is a consequence of a generation raised on The Simpsons.

"Sheldon: See, Leonard refused to participate in a mandatory quarterly roommate agreement meeting. This is what a generation raised on Bart Simpson looks like.
Leonard: You love The Simpsons.
Sheldon: I love Lisa Simpson."

Bernadette: You all right?
Howard: I'm fine. Just a little embarrassed I had to be carried down the stairs like a baby. (To Penny) Thanks.

Stuart: So what happened with you and Howard?
Raj: Says I was talking too much about dating Claire and Emily, and I accused him of being jealous.
Stuart: I'm jealous. Closest I've come to dating two women was that time I dated one woman.

Sheldon: I have a question about Batman. Batman is a man who dresses up like a bat. Man-bat is a part man, part bat hybrid. Now, if Man-Bat dressed up as a man to fight crime, would he be Man-Batman?
Leonard: No, he'd be Bat-Man-Bat.
Raj: But wouldn't Man-Batman just be a Batman that was bitten by a radioactive man?
Howard: But Batman is a man. You're talking about a man who would have the powers of a man. That's just Man-Man.
Sheldon: Well, isn't Man-Man just Man?
Leonard: But what if Man-Man dressed as a bat?
Raj: Well, that's just Batman.
Leonard: No, if a man dresses as a bat, that's Batman, but if Man-Man dresses as a bat, that's Batman-Man.
Howard: So does that answer your question?
Sheldon: Oh, I haven't asked it yet.

Leonard: Really? The guy who for years couldn't even talk to women is suddenly going out with two of them? How is that possible?
Howard: I know. Scientists have tried to reproduce it with computational models, but, in each case, the world blows up.
Leonard: Seriously, that guy's dating two women?

At the comic book store, Sheldon tells the guys he has a question about Batman and Manbat. When Raj gets a text message from Claire, he explains he is seeing both her and Emily. After Raj leaves to go meet Claire, Leonard can’t hide his surprise that the guy who couldn’t talk to women for years is now going out with two of them.

In the apartment, Leonard is preparing snacks and has bought a party sub for their Game of Thrones viewing party. After Sheldon reminds Leonard that their quarterly Roommate Agreement meeting is tomorrow, an exasperated Leonard says they don’t need a meeting every three months and he’s not going. Sheldon says they don’t have to have a roommate agreement if he doesn’t want, but it will require a vote. He gets out his travel gavel for the motion, but it fails to pass after nobody votes for it. Leonard asks Penny to talk to Sheldon, but she can’t see why he’s fighting Sheldon on this. Leonard doesn’t understand why Penny is taking Sheldon’s side.

As Howard and Raj play video games, Raj says he’s worn out now he’s dating two women at once. Raj claims not to even remember the last time he slept in his own apartment. When Bernadette comes in the room, Raj asks how the mother-to-be is. Bernadette says she’s tired, prompting Raj to say he is too as he’s dating multiple women. Howard asks if she wants to join their Game of Thrones viewing party, but she says she’s just going to snuggle up in bed with a book.

Back in the apartment, Penny accuses Leonard of pouting, but he just wants to be left alone. Penny tells Leonard they know he’s going to make up with Sheldon, so why don’t they just skip ahead to that? Leonard says he is tired of feeling like the only adult around here. Penny says you would think the “only adult” wouldn’t let such a trivial matter ruin their evening, but Leonard says you would think she should know why he is feeling annoyed.

As Howard and Raj drive over to the apartment, Howard admits he doesn’t know whether he’s hoping for a boy or a girl. If it’s a boy, he’d have to learn how to play catch. If it’s a girl, they’re so innocent and you know how guys are. Raj knows guys are the worst, citing his relationships with Emily and Claire. After Howard says “there you go again”, Raj wonders if he’s been complaining his dating situation too much. Howard argues he’s just pretending to complain and is really just bragging.

When Amy wonders why Leonard is so angry, Penny and Sheldon explain he’s upset about having to attend the roommate meeting. After Amy says she gets why Leonard is annoyed, Sheldon tries to explain to her why she’s wrong. Amy knows how Leonard feels, saying she never enjoyed her relationship agreement meetings with Sheldon.

As Howard and Raj climb the stairs in silence, Raj wonders whether he said something to upset Howard. Howard insists he’s fine and wants Raj to drop it. Raj claims Howard is jealous of him dating two women. When they reach the fourth floor, Penny and Sheldon emerge from the apartment with half of the party sub. After Howard asks what’s going on, Penny says Leonard is being a jerk and they’re going to watch Game of Thrones in her apartment. When Amy invites Howard to join her and Leonard, he’s up for that as long as he doesn’t have to watch it with Raj. Raj decides to go with Sheldon and Penny.

Back in the apartment, Leonard tells Howard he ran out of patience with Sheldon’s nonsense. Howard admits he’s had enough of Raj, too. Amy points out that men have a monthly hormone cycle like women, which can cause irritability. When there’s a knock at the door, Leonard wonders if someone has come to apologize. He opens the door to find Stuart in a Game of Thrones-inspired costume. Stuart is surprised to find it’s not a dress-up party as Howard told him.

Stuart knocks on the door and enters Apartment 4B, explaining he was told that’s where to go if he’s mad at Howard. Sheldon catches Stuart up: Penny is angry at Leonard, Leonard's angry at him and Penny, he’s angry at Leonard and Amy, Raj is angry at Howard, and Sheldon’s angry at George R.R. Martin 'cause there are no new books for him to spoil for Leonard. Raj goes on to explain Howard is angry with him for talking too much about dating Claire and Emily, but he thinks Howard is just jealous of him. Stuart admits he is jealous is Raj.

In the apartment, Leonard thanks Amy for sticking up for him. Amy admits she couldn’t care less about their argument. She only took his side because she’s annoyed at how close Sheldon and Penny are. Leonard points out they argue all the time, but Amy says Penny is the one who comforts Sheldon when he’s upset and gets him to take his medicine when he’s sick. Amy reveals that Penny has Sheldon add things to the roommate agreement so she can get her way without fighting Leonard about it. After Howard laughs, Leonard points out Bernadette does the same thing with him and Koothrappali.

Over in Penny’s apartment, the group sit down as Game of Thrones is about to start. After there’s a knock at the door, Penny opens it to Leonard, who tells her she doesn’t need to use Sheldon to get her way in the dumb roommate agreement. When Penny wonders where he got that from, Leonard admits it was Amy. Penny walks into the hall to ask why Amy revealed that. Amy comes out to say it’s because Penny always defends Sheldon. As they bicker about Sheldon and Penny’s relationship, Howard asks if there were any nuts in the food. When he walks into the hallway, his face is hideously swollen.

As the group sit around in a hospital waiting room, Leonard says he didn’t realize the Italian sub contained pistachios. Everyone is relieved when Bernadette comes out to say Howard is going to be okay. Raj claims tonight’s events were like a real life Game of Thrones, but the friends don’t find his examples very convincing. Howard comes out and says he’s fine, so they decide to get out of there.

As Stuart, still in his costume, gets on his bicycle outside the apartment building, Raj, Sheldon and Leonard yell insults at him from the apartment window.

Later that night, Sheldon knocks on Leonard’s bedroom door as he and Penny are sleeping. When Leonard asks what he wants, Sheldon says he never got to ask his question about Batman and Manbat.