Leonard, Howard and Raj go away on a camping trip in the desert to watch a meteor display. Their camping trip takes an interesting turn when they enjoy some cookies prepared by two hippies. Back at the apartment, Penny dislocates her shoulder in the shower and must rely on Sheldon to help her. 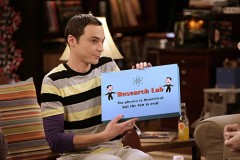 307 - The Guitarist Amplification
Next Episode

The roles are reserved in this episode as Sheldon must take care of an injured Penny. Following a trip to the hospital, a medicated Penny asks Sheldon to sing Soft Kitty to her. Sheldon initially refuses as Penny isn't sick, but she counters that injured and drugged is a kind of sick. After Sheldon relents and starts singing the song, Penny suggests they sing it as a round.

When Penny calls for Sheldon after she falls in the show, Sheldon uses his knock of every closed door in apartment. As he approaches the bathroom, Penny yells for him not to knock on the door.

Raj: If I could speak the language of rabbits, they would be amazed, and I would be their king.
Leonard: I hate my name. It has 'nerd' in it. 'Len. Nerd.'
Wolowitz: I lost my virginity to my cousin Jeanie.
Raj: I would be kind to my rabbit subjects. At first.

Wolowitz: You're such a douche
Raj: Who cares? You slept with your cousin!

Sheldon: Now remember, you were given powerful pain medication and a muscle relaxer, so don't operate heavy machinery, and try not to choke on your own drool. [goes to leave] Penny: Wait! You have to help me get into bed. [laughs] "Sheldon has to help me get into bed". Bet you thought I'd never say that!
Sheldon: Yes. Charmed. Your drug-addled candor knows no bounds. [helps Penny into bed]
Penny: You know people think you are this weird robot man who's so annoying all the time and you totally are. But then it's like that movie Wall-E at the end. You're so full of love and you can save a plant and get fat people out of their floaty chairs.
Sheldon: That's a fairly labored metaphor but I appreciate the sentiment behind it.

Raj: With your American accent, everything you say sounds stupid.

Penny: You gotta help me get my arm into my sleeve.
Sheldon: (Eyes closed) Okay!
Penny: Is that my arm?
Sheldon: It doesn't feel like an arm.
Penny: Then maybe you should let it go.

Leonard, Howard and Raj are camping out in the desert to observe the Leonid Meteor Shower. As they wait for shower, the guys are watching satellite TV. Back at the apartment, Sheldon is working on a paper and is recording his actions in a "personal log" in a Star Trek-like fashion.

As Sheldon orders his dinner from Siam Palace, he hears Penny shouting from across the hall. Sheldon runs to her apartment and, after knocking on her door, is told to enter. Sheldon hears Penny calling from her bedroom and runs to her bedroom door, knocking again. Sheldon, after being told not to dare knock on her bathroom door, enters to find Penny in the bathtub. She explains she slipped in the shower and dislocated her shoulder. Sheldon puts the accident down to lack of adhesive stickers in the tub (Sheldon has ducks). Penny begs Sheldon to drive her to the emergency room. Though Sheldon initially resists, he comes round and declares "Never let it be said that Sheldon Lee Cooper ignored the pleas of a damsel in distress".

Back in the desert, Howard and Raj are on the lookout for women. They find a group of fifty-something middle school teachers in a VW Microbus wearing tie-dye Grateful Dead t-shirts, who give them some homemade cookies. Elsewhere, Penny needs Sheldon's help dressing. She tells Sheldon to close his eyes and put her clothes on. Sheldon agrees to do this, explaining there's a well established prohibition against looking in heroic mythology. Sheldon proceeds to dress Penny, although his lack of sight leads to some inappropriate touching.

The guys are now experiencing the effects of the cookies they ate. They stare mindlessly at the stars. When Leonard feels the earth is moving too fast for him, Raj squints to slow the earth down. Back in Pasadena, Penny and Sheldon are now in her car. Sheldon prepares for his first time driving an actual motor vehicle.

In the desert, the guys are now particularly incoherent as Raj rambles on about becoming the leader of rabbits, Leonard obsesses over his name having "nerd" in it, while Howard reveals he lost his virginity to his second cousin Jeanie. Meanwhile, Sheldon is driving Penny to the hospital - extremely slowly and cautiously. While at a stop light, Sheldon wonders why Penny has the Chinese character for soup tattooed on her right buttock. Penny claims it's the symbol for courage, but Sheldon is clear that it's soup. Sheldon explains that, despite his earlier promise, the hero always peeks.

Back at the camp, the guys have a full blown case of the munchies as they go searching for more food to devour. In the hospital emergency room, Sheldon annoys Penny as he fills out her medical form. When Penny admits she's scared and in a lot of pain, Sheldon tries comfort her with his best "There, there. Everything's going to be fine. Sheldon is here", though it comes across terrifying. Elsewhere, Howard remembers his mother packed him a care package containing brisket, potatoes and carrots. The guys ravage the food, unaware the meteor shower is now happening.

Sheldon walks Penny back to her apartment door where she asks him to put her to bed. Penny, in a drug-addled state, starts babbling about how people think Sheldon is an annoying robot man, but that underneath - like Wall-E - he's full of love. Penny then asks Sheldon to sing him Soft Kitty and, after he eventually agrees, they sing it in the round. Back at the camp, the guys are making fun of Howard for sleeping with his cousin.