When Sheldon feels that Amy's job isn't leaving her enough time to work with him on super-asymmetry, he goes behind her back and unwittingly sabotages her career in the process. Meanwhile, Raj is unhappy at the prospect of Howard joining him in hosting a show at the planetarium. 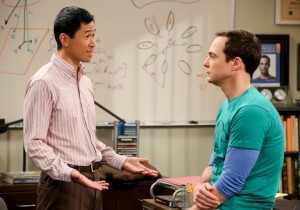 1204 - The Tam Turbulence
Next Episode

After Professor Proton advised Sheldon not to go to bed angry in a relationship, Sheldon wakes Amy up in the middle of the night to apologise. As a drowsy Amy tries to go back to sleep, Sheldon repeatedly taps Amy on her shoulder and calls out her name, reminiscent of his knock.

Raj: Recently, 12 new moons were discovered orbiting Jupiter, bringing the total up to 79.
As a middle child myself, I'd like to extend my sympathies to moons two through 78. Your grandpa will never learn your name. I'd like to thank you for joining me on this journey through the stars. If you enjoyed this lecture, please come back Thursday for the exact same one.

Penny: So when was the last time you saw Howard in his astronaut uniform?
Bernadette: About a week ago.
Penny: Really? What was the occasion?
Bernadette: Date night. We do a little role-playing.
Penny: What role do you play?
Bernadette: (Russian accent) I am Ykatarina Nazdorovya, lonely Russian cosmonaut who is expert at physics and making love.
Penny: Okay, that just made the next hour really weird.

Raj: I came here for your support.
Leonard: Well, then, you just walked up three flights of stairs for nothing.
Penny: Wait, don't you mean four flights?
Leonard: No, it's actually three.
Penny: But we're on the fourth floor. I mean, you have the lobby, first floor, second, third, fourth.
Leonard: The lobby's the first floor, so lobby, second, third, fourth.
Penny: That does not seem right.

As Raj concludes a show at the planetarium, his friends are sitting in the audience. Sheldon and Amy are passing notes between each other, discussing their theory of super-asymmetry. After the show is over, Howard goes up to speak to Raj, who introduces him to to the director of the planetarium. When Howard mentions that he’s an astronaut, she suggests that Raj invite him to join one of his shows. Howard is keen on the idea, but Raj clearly does not relish the thought of sharing the stage with Howard.

As Amy tells a research subject about the sensory isolation helmet she’s about to place on him, Sheldon runs in to ask if she’s busy. Amy points out she has a subject wired up for a sensory experiment, but Sheldon isn’t sure that’s a definitive answer. Sheldon explains he had a thought about their super-asymmetry project and wants to show her something. Amy says she wants to see it, just not when she’s in the middle of an experiment. Amy tells Sheldon she’s excited about their paper, but she has her own work to do so they should talk later. Sheldon finally gets the message.

As Bernadette kisses Howard in their bed, she notices he seems distracted. Howard admits he’s thinking about Raj, explaining that Raj hurt his feelings by not wanting him to be in his planetarium show. Bernadette argues that Raj can’t be blamed for not wanting to share the stage with a “sexy-ass astronaut”.

In the apartment, Sheldon is discussing science with Penny. When Leonard gets home and sees Sheldon holding court in the living room, he claims to be late for something and tries to head out again. Penny stops Leonard from escaping. Sheldon wanted to talk science with Amy but she was busy, so he came over to talk with Penny instead. Sheldon says he’s been enjoying his collaboration with Amy, but ever since they got back from their honeymoon she hasn’t had much time. Leonard points out that Amy does have her own job, but Sheldon thinks neuroscience is a waste of time. Penny decides she’s got to go out to that thing Leonard was late for, so she tells Sheldon he talk with Leonard instead.

When Howard goes to Raj’s office to talk, he tells him he understands why Raj doesn’t want him to be part of the planetarium show. Howard recognises it would be intimidating talking about stars with a real-life astronaut next to him. Raj accepts Howard’s achievement but points out he’s also very accomplished in his field. After insisting he’s not scared of sharing a stage with Howard, Raj storms off. He sheepishly walks back into his office after realizing he has nowhere to go.

In President Siebert’s office, Sheldon is surprised to learn that Siebert is actually a physicist. After Sheldon explains what he and Amy have been working on, he gets to the crux of the matter: Amy is too distracted by her own work to focus on their theory of super-asymmetry. Siebert is confused why Sheldon would need a neuroscientist with him, but Sheldon argues that Amy’s contribution has been invaluable. Sheldon assures Siebert that him working with Amy wouldn’t lead to any work-place hanky-panky.

When Amy shows up for work, she’s surprised to find Dr. Park working in her lab. After Amy expresses her confusion, Dr. Park explains that he was assigned her project because he heard she’s taking a temporary sabbatical to focus on other work. As Sheldon arrives to tell Amy the “exciting” news, Dr. Park explains that President Siebert said she was focusing on some important physics work instead.

Still in her lab, Amy can’t believe Sheldon had her removed from her own project. Sheldon points out it wasn’t easy as the university considered Dr. Park quite the step down. Amy tells him he had no right to do this. Amy tells him this is her life’s work and now she has to watch somebody else come in and do it. Amy wonders how Sheldon would feel if Leonard took over his super-asymmetry work.

When Raj arrives at the apartment with food, Leonard and Penny are pleased though they sense he probably has ulterior motives. Raj admits he needs their help. Raj told Howard he could join his planetarium show, but now he’s having second thoughts as he’s worried Howard will make the whole show about himself. Raj doesn’t want to back out as Howard would think he’s insecure sharing the spotlight with him. They tell Raj that he shouldn’t care if Howard tries to steal the show, he should just be the bigger man. Leonard and Penny promise to attend the show so Raj will at least have some friendly faces in the audience.

When Sheldon and Amy arrive at President Siebert’s office, Amy tells her boss he had no right to reassign her project. President Siebert is confused as Sheldon assured him that’s what she wanted. President Siebert apologises to Amy, saying she’s very important to the university. When Amy asks if that means she’s getting her project back, Siebert admits it’s unfortunately not that simple. Sheldon interrupts his boss to chide Siebert for “mansplaining” to Amy, but she doesn’t think that’s what he was doing.

When Raj begins his show at the planetarium, he mentions that he usually takes them on a tour of the stars, but tonight they’ll begin their journey closer to home at the International Space Station. Raj brings Howard on stage, much to the excitement of Bernadette who appreciates the sight of Howard in his astronaut uniform. After Raj gives Howard a laudatory welcome, they start exchanging compliments and express their pride in each other. When Howard and Raj start hugging, Bernadette quickly loses her randy mood.

As Sheldon dreams of being in a deli with Professor Proton, he explains that he’s having a problem in his marriage and he’s not sure how to make things right. Professor Proton gives Sheldon two rules for marriage: 1. Never go to bed angry, 2. If you don’t recognise the shoes under your bed, they’re not your shoes.

When Sheldon jumps up awake, he tries to wake Amy up to say they can’t go to bed angry. Amy insists she doesn’t want to talk about it right now, but Sheldon wants her to know he feels terrible about what he did. Amy accepts he wasn’t being malicious, but she argues he was being selfish and he’s being selfish now making her talk now when she wants to sleep. Amy tells him she loves working with him, but her project being taken away added to her fear her that she might lose herself in their relationship. Sheldon concedes wouldn’t want that either and thanks Amy for explaining this. After they say good night and try go back to sleep,  Sheldon checks under the bed for shoes.