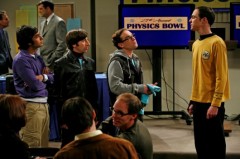 The guys enter the college's Physics Bowl tournament, but Sheldon's inability to be a team player gets him thrown off the team. Sheldon decides to enter his own team, while the guys recruit Sheldon's nemesis, Leslie Winkle. 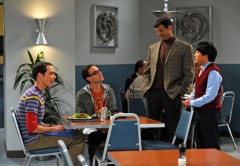 112 - The Jerusalem Duality
Next Episode 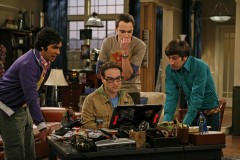 Wolowitz: That's more like we're a tall thin woman who wants to make a coat out of your Dalmatians.

Sheldon: Teams are traditionally named after fierce creatures thus intimidating one's opponent.
Raj: Then we could be the Bengal tigers.
Sheldon: Poor choice. You know, gram for gram no animal exceeds the relative fighting strength of the army ant.
Raj: Maybe so, but you can't incinerate a Bengal tiger with a magnifying glass.

Leslie: There's no reason to feel uncomfortable just because we've seen each other's faces and naked bodies contorted in the sweet agony of coitus. Rest assured that any aspects of our sexual relationship regarding your preferences, your idiosyncrasies, your performance, are still protected by the inherent confidentiality of the bedroom.

The guys consider entering the university's Physics Bowl Quiz after one of its leading teams pulls out, but Sheldon is initially unwilling to use his genius to win a contest. After the guys talk Sheldon into joining their team, he threatens to quit if they don't go with his idea of naming the team the Army Ants.

When the guys are practising for the contest, Sheldon doesn't give the others a look in when he answers every question himself and promotes himself to team captain. Later, Leonard brings Sheldon a Batman cookie jar as a consolation gift for being thrown off the team. Hurt by the guys' decision, Sheldon decides he will form his own team to take them on. In the university cafeteria, Leonard, Howard and Raj are searching for the fourth player their team needs. Leonard approaches Leslie Winkle, who initially rejects their offer until she learns they are going up against Sheldon.

On the day of the Physics Bowl, Sheldon arrives with his team, which he padded out with a janitor, a lunch-lady and either her butcher or her son.  The teams are neck and neck until the difficult final question. Leonard panics and gives the wrong answer, throwing the question to Sheldon who clearly does not know the answer either. Sheldon's Janitor team-mate, who explains he was a physicist in his native Russia, gives the correct answer but Sheldon refuses to let anybody but him provide the answer. Since Sheldon refuses to answer the question, Leonard's team (PMS) is crowned the winner.