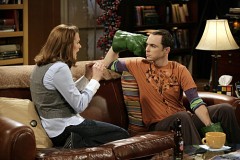 Raj enlists Sheldon as his wingman when they attend a university mixer together. When Sheldon and Raj both meet girls at the party, Sheldon's "date" is in for a unique evening as he is oblivious to her advances. Meanwhile, on a double date with Howard and Bernadette, Leonard and Penny argue after he ridicules her belief in psychics. 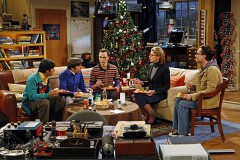 311 - The Maternal Congruence
Next Episode

Raj: You can't wear the hands on the date.
Sheldon: Hulk sad!

Penny: You know, I believe in ghosts, too.
Leonard: Great.
Penny: And astrology.
Leonard: I know, and pyramid power and healing crystals.
Penny: Oh, no, no, no, crystals don’t work.
Leonard: Really, that’s the line? Psychics are real, but crystals are voodoo?
Penny: Oh, Voodoo is real. You don't want to mess with Voodoo.

Leonard: How can I go out with a woman who believes in psychics?
Howard: Hey, I once dated a girl who believed she was abducted by aliens.
Leonard: And that didn't bother you?
Howard: Au contraire. It meant that she was gullible and open to a little probing.

Leonard: What's going on?
Sheldon: We scored. I'm the wingman.

Leonard and Howard are going on a double date with Penny and Bernadette, leaving Raj alone with Sheldon for the night. Sheldon plans to spend the evening installing a Linux partition, but Raj would prefer to do something more exciting. When Raj suggests a few events he and Sheldon could go to, Sheldon is not interested and instead suggests an imaginary trip to Flatland.

Leonard, Howard, Penny and Bernadette are chatting in the car on the way to the restaurant. When Penny tells them she got career advice from a psychic, Leonard bursts into laughter, offending Penny. Back at the apartment, Raj suggests they go to a university mixer for the science and philosophy departments ("For those who split atoms or infinitives"). Raj offers Sheldon his Green Lantern lantern to be his wingman. Raj and Sheldon arrive at the mixer with Sheldon carrying the lantern.

A woman, Abby, is drawn in by the Green Lantern lantern and comes to talk to the guys. Abby is interested in Raj and introduces her friend Martha for Sheldon. On their double date, Leonard refuses to let the issue of psychics drop, while Howard and Bernadette wisely avoid interfering in their argument. Back in the apartment building, Leonard tries to explain his point of view to Penny, who refuses to listen. Leonard returns to his apartment to find Sheldon, Raj, Abby and Martha playing rock band.

The next day in the cafeteria, Leonard asks Howard how he can be with Penny when she believes in thing he doesn't. Howard explains by way of a Venn diagram that Penny is his only chance for a relationship and he should ignore their differing opinions. Back at the apartment, Sheldon is learning Finnish while he waits for his hard drive to reformat. Raj arrives and wants to go on another double date with Abby and Martha, but needs Sheldon. Sheldon eventually agrees to go when Raj bribes him with his Incredible Hulk hands signed by Stan Lee.

While Penny does laundry, Leonard goes down to explain himself to Penny. Penny isn't interested in reading his book debunking psychics, but does invite him to visit her psychic with him. In the interest of their relationship, Leonard agrees to go. On their second double date, Martha and Sheldon are discussing Flatland, while Abby and Raj make out. When Sheldon announces that it's time for him to go to bed, Martha is surprised that this wasn't an invitation for two. Martha soon knocks on Sheldon's door and asks whether she could hang out in his bedroom for a while. Sheldon agrees and lets her in, and then announces he'll go sleep in Leonard's room.